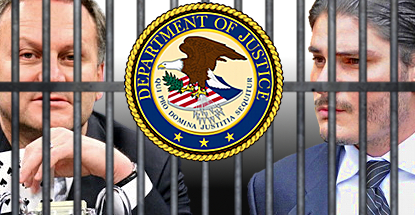 Two more defendants have been sentenced to prison for their roles in the Russian-American illegal sports betting and poker ring broken up by the US Department of Justice last April. New York art dealer Hillel ‘Helly’ Nahmad (pictured far right) and pro poker player Vadim Trincher (on the left) were among the 34 individuals hit with a litany of charges for their involvement in the so-called Taiwanchik-Trincher Organization, which catered to a clientele of high-rolling gamblers that included Hollywood celebrities and Russian oligarchs. Both men appeared in federal court on Wednesday to learn their fate from Judge Jesse M. Furman.

Trincher, fingered by the US Attorney for the Southern District of New York as one of the ring’s three leaders, was originally charged with illegal gambling, racketeering, extortion and money laundering. In November, Trincher struck a deal with prosecutors to plead guilty to a single count of racketeering conspiracy and to forfeit cash and property worth $20m. On Wednesday, Furman sentenced Trincher to five years in prison. Trincher reportedly sobbed while apologizing for his actions in court.

Nahmad also pled guilty in November to conducting an illegal gambling business and agreed to forfeit $6.5m in cash and property. Prosecutors had recommended a jail sentence of between 12-18 months, while Nahmad’s attorneys had asked for probation in exchange for Nahmad sponsoring a program to teach inner city youth all about art.

At Wednesday’s hearing, prosecutors showed Furman a picture of the 35-year-old Nahmad courtside at a New York Knicks game one month after he was arrested. The photo showed Nahmad wearing a baseball cap emblazoned with a playing card, which prosecutors offered as evidence that Nahmad wasn’t taking the charges seriously. Nahmad’s attorney Benjamin Brafman insisted he’d invited his client to the game to cheer him up and that Nahmad only grabbed the hat as he was leaving his apartment to help conceal his identity.

Furman ultimately sided with prosecutors, saying wiretap evidence had shown Nahmad wasn’t just “the rich kid who is getting used” but an active member of the ring. Furman also said Nahmad’s proposed art school program was “as low hanging fruit as it gets” and going along with it “would breed contempt for the law.” Instead, Furman sentenced Nahmad to a year and a day in prison, three years probation and 300 hours of community service. Nahmad will also have to undergo drug testing upon his release.

Wednesday’s sentences, along with the five-year sentence meted out to Anatoly Golubchik on Tuesday, makes 29 defendants who have pled guilty and two more who have entered into deferred prosecution agreements. To date, these defendants have collectively agreed to forfeit over $68m in cash and property. The organization’s alleged ringleader, Alimzhan ‘Taiwanchik’ Tokhtakhounov, remains at large in Russia.