Home / Poker / Kristy Arnett: The Next Female Star of Poker 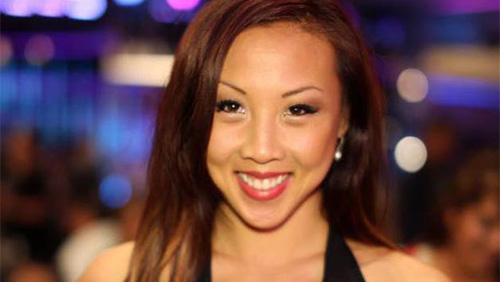 Lee Davy sits down to talk to Kristy Arnett about her decision to leave her role at PokerNews to pursue a career as a professional poker player.

For the past four years Kristy Arnett has been one of the most prominent figures in the PokerNews team.

Her role as a host, sideline reporter, writer and podcast aficionado ranks alongside the highest quality output you will find anywhere in the business, and her decision to leave the team, after four glorious years, must rank as one of the toughest decisions she has ever had to make.

So what next for one of the most respected authorities in world poker?

Let’s ask her shall we…

What’s it like on the other side of the microphone?

“To be honest with you it’s really nerve wracking. The first interview I did when I quit was with 2+2 and I couldn’t even listen to it. I sounded like the craziest women ever. I now have so much empathy for the people I have interviewed throughout the years. I get it now. It’s tough.”

When did the idea to leave PokerNews first come into your head?

“I think it was around last years World Series of Poker. Once the summer was over I was in a daze because I had worked so hard, and so I think this is when the idea first sparked into my head.

“It’s tough when you know you have the most amazing job, but I had to make the decision for myself.”

How tough is the PokerNews job?

“People don’t realize that all of us girls produce every single video. There is nobody telling us what to do. Everything we put out there comes from our own creativity. That’s definitely the most difficult because you want to push new content that isn’t the same old stuff, but you are really putting yourself out there by trying to be creative.”

What’s next for you?

“I am going to be playing professionally for the foreseeable future. I have projects that I want to work on, and I recently became certified as a personal trainer.

“I want to see what type of player I can be given that this is my number one priority as far as career things go. I am going to be playing live cash games. I want to play some WSOP events, including the Main Event, so next month I am going to try and get myself in tournament shape.”

Who has been helping you with your game?

“The first person on my team is my husband who is one of the most consistent live cash game players in Vegas. It’s great having him in my corner and now I have no choice but to listen. In the past I have had a little bit of a chip on my shoulder, but I know I need to drop the ego if I want to improve.

“We also have a couple of really good friends who are online crushers. That’s my team at the moment…and Baluga Whale will always be a part of my team.”

“That’s a good question. I think I have always known that poker won’t be fulfilling enough by itself. I don’t think I ever really wanted to be a professional player: partly through fear and also partly because I don’t necessarily want the pressure. I have lived in Vegas for seven years now and I have seen people come and go and they often leave in a far worse condition from when they arrived.

“Now I believe playing full time will give me the opportunity to chase lots of dreams, so it’s not just like I am going to just have my head down and grind. It’s going to open up the opportunity for me to pursue so many other things.  Before I had no other ambitions other than my job.”

To get the full interview please click on the audio link above.