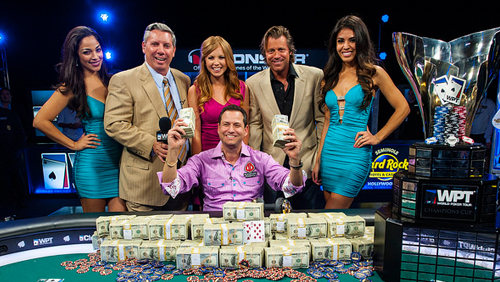 Eric Afriat is the newest member of the WPT Champions Club after managed to bob and weave his way through a field of 1,795 players, and a quite amazing final table.

The 44-year old businessman was making his second appearance at a WPT final table, but not many people would have had him marked down for the win, when you consider the caliber of talent that he was up against.

Is there anybody playing better poker than Mukul Pahuja these days?

His form on the WPT circuit has been that red-hot, that had he won this event he would have become the first player in history to have sewn up the Player of the Year debate before a card had been flicked around the WPT World Championships.

It was Pahuja’s third final table of the season, and once again he would have to settle for a close-run thing, as he just couldn’t find the right combination of skill and luck to push past the bigger stack of Afriat.

Joining Pahuja and Afriat at the final table was the highly rated Jacob Bazeley & Matt Stout, and the World Series of Poker (WSOP) bracelet holders Chance Kornuth and James Mackey.

Here is how they began the final table

The first player to be eliminated from the final table was one of those WSOP bracelet holders. Chance Kornuth moving all-in from the button, after James Mackey had opened from the cutoff. Mackey made the call holding [Ah] [Ts] and Kornuth showed [Kd] [Qs] for the race. A queen did turn up on the flop to place Kornuth into the lead, but the [As] on the turn flipped the race back into Mackey’s favor, and after the river bricked Kornuth was out.

The fifth place finisher was a man who was making his second WPT final table performance. Matt Stout had high hopes for this one after declaring he was playing some of the best poker of his life, but he will have to wait a little while longer before he can get his hands on his first major title.

Stout moving all-in from the button holding [Qd] [Ts] and Mukul Pahuja called in the small blind holding [As] [8h]. The ace high hand held and Stout was out.

Jacob Bazeley was next to walk and this time it was the Eric Afriat holding the hatchet. The pair got it in on a [Jh] [8h] [4s] flop, in a single raised pot, with Bazeley holding pocket aces and Afriat holding [Js] [8s] for top-two pair, which held.

Three became two after James Mackey was sent spinning by Mukul Pahuja. The Player of the Year leader calling a Mackey shove that saw him leading with 99 v K7cc. No king, no seven and only one club meant that Mackey was out and Pahuja trudged into his heads-up confrontation with Afriat with a 2:1 chip deficit.

It would be the second time that Pahuja would square off for the chance to join the WPT Champions Club, but once again he fell short at the vital moment.

The final hand played out when Pahuja moved all-in for around 10m chips, over a Afriat min-raise. Afriat called and turned over pocket eights against the [Kh] [9s] of Pahuja. The board stayed as low as a limbo dancer and Pahuja once again had to settle for second place, but is a huge favorite to pick up the consolation of the WPT Player of the Year award.

Afriat walked away with all the praise, the photos, the gold Monster headphones, the $15,400 seat in the World Championships and of course $1m in change.