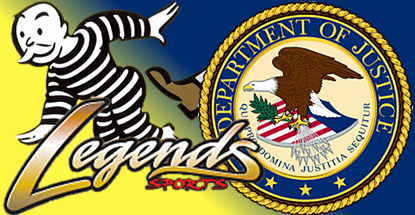 Philip Gurian, a key figure in the operations of now defunct online sportsbook Legends Sports, has been sentenced to time served by a federal judge. The 52-year-old Florida resident has been in federal custody since his arrest in New York on April 10, 2013. Gurian was one of 34 individuals arrested as part of a joint operation by the Department of Justice, the Federal Bureau of Investigation and state law enforcement officials in New York and Florida.

Gurian pled guilty to money laundering conspiracy in October and has already forfeited a total of $10m. On Tuesday, US District Court Judge Mae D’Agostino ordered Gurian to pay a fine of $100k and gave him three years of supervised release. D’Agostino also ordered Guiran to steer clear of gambling facilities and prohibited him from owning a computer or any other device capable of connecting to the internet. As a final indignity, Gurian will also be required to file tax returns for the years spanning 2003 to 2012.

While D’Agostino may have spared Gurian any further jail time, she didn’t mince words in her appraisal of Gurian’s character. Referencing the letters of support friends and family had written to the court on Gurian’s behalf, D’Agostino wondered if they really knew the man standing before her. Saying Gurian had “quite a history of being a con,” D’Agostino said she judged people “on what they do when they think people aren’t watching. You behave very badly when you think people are not watching.”

In response, Gurian said he took accountability for his actions and vowed to “live a productive, peaceful, law-abiding life” from this point forward. An unmoved D’Agostino noted that “with rare exception,” Gurian’s income had been entirely obtained from illegal sources. “So when you say you’re sorry and you say you’re going to live as a law-abiding citizen in the future, one can only hope.”