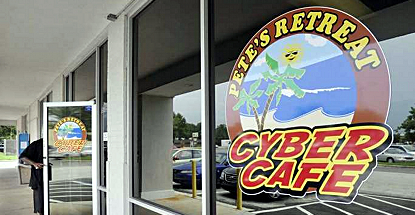 But as police in many other US states have learned, sweepstakes operators are something of a gambling Hydra, in that closing one operation seems to lead to the opening of nine others. On Thursday, Florida’s Illegal Gaming Task Force raided 24 establishments suspected of operating illegal sweepstakes businesses, seizing computers, cash and financial records. Speaking at a post-raid press conference, prosecutor Nick Cox said he was “shocked” when he was told the law had failed to eradicate the café scourge, but warned that “if they’re open … we’re coming.”

Most of the 24 establishments raided on Thursday were either owned or operated by Neptune Beach businessman Peter Miller and Lake Mary resident Ivan Vega. Vega was arrested on a separate warrant from an earlier investigation and charged with keeping a gambling house and possession of gambling devices. Miller wasn’t talking yesterday, but he has previously insisted that his operations act within the law. Operators have long argued that their businesses are no different from the types of sweepstakes offered by mainstream businesses like McDonalds, in which customers buy a Big Mac and get entered into a prize drawing.

Last month, Gov. Rick Scott took to his Twitter account to trumpet the fact that the state had outlawed internet cafes in 2013, thereby “helping to protect Florida families.” As befitting a man who has accepted hundreds of thousands of dollars in campaign contributions from Las Vegas Sands boss Sheldon Adelson, Scott also found time to tweet his support for Adelson’s anti-online gambling crusade.

Linking to a recent Associated Press article listing three other Republican governors – Rick Perry (Texas), Nikki Haley (S. Carolina) and Bobby Jindal (Louisiana) – whose lips were no strangers to Adelson’s pinkie-ring, Scott said that while “a national ban [on online gambling] would be a better approach, I support a ban on internet gaming in Florida.” One likes to imagine that Scott then printed out the tweet, put it under his pillow and went to bed, sure in the knowledge that the Campaign Contribution Fairy would replace it overnight with a big fat check.