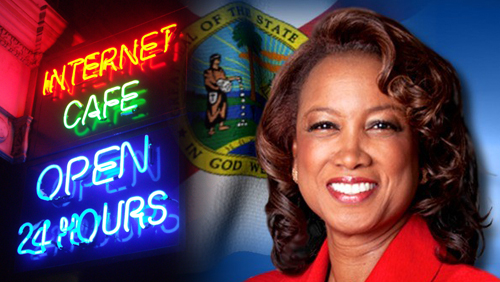 Jacksonville Lawyer, Kelly Mathis, 49, has been described as the ‘Mastermind’ behind a gambling ring that has used veterans as a front to cream $300 million from Internet cafes spanning 23 Florida counties and six states.

Allied Veterans of the World is a non-profit organization that has been helping needy veterans since 1979, but little did the veterans know that they were being swindled out of millions of dollars.

Between 2007 & 2012, Allied Veterans operated 49 Internet cafes in Florida that brought in profits totaling $300 million. That’s big bucks, and plenty of sunshine to splash out on the needy veterans going through rehabilitation in the veteran administration hospitals and clinics throughout the U.S, yet only $6 million is thought to have appeared in the books as charitable donations – just 2% of total earnings.

The authorities said that the four main ring leaders received more than $90 million from the non-profit organization that was masquerading as a charity: Mathis, Jerry Bass, 62, National Commander of Allied Veterans, Johnny Duncan, 62, of South Carolina and Chase Burns, 37, of Oklahoma.

Burns is the technical man behind the outfit and the owner of International Internet Technologies (IIT), which has been accused of providing the technical savvy to run the cafes beneath the cloak of Allied Veterans. Authorities have said that IIT earned $68 million from the gambling centers that Allied Veterans were operating.

The red lights should have been flashing where Duncan was concerned, because in 1987 he was charged with creating a fake charity to sponsor bingo gaming, which allowed games to operate in a tax-free way. By 1989 Duncan was running South Carolina’s largest bingo network. He was sentenced to six-month probation and forbidden to operate bingo games in Florida. The fake charity was called Army Navy Union.

Florida Lt. Gov. Jennifer Carroll was also questioned, along with over 50 other people connected to the investigation. Allied Veterans was a client of a public relations firm that Carroll co-owned. She was not charged with any wrongdoing and immediately stood down from her role as governor the same day she was questioned. Carroll said in a statement that neither she nor the public relations firm was targeted in the probe, and she stepped down so that her ties to the organization would not be a distraction for Republican Gov. Rick Scott’s administration.

“I have and will continue to fully cooperate with any investigation,” Carroll said.

At least 49 Internet cafes, owned by Allied Veterans, have been closed down, and 300 bank accounts containing $64.7 million have also been seized in the crackdown.

Florida Department of Law Enforcement Commissioner, Gerald Bailey, said the arrests was only the first wave, with the second part of the investigation focusing on political contributions Allied Veterans have made, and gambling centers not operated by the charity.

The breaking news comes just weeks after the New York Yankees Baseman, Alex ‘A-Rod’ Rodriguez, was paraded front and center after a new Boston Globe review of IRS filings by more than 50 athletes, showed that they weren’t too generous when it came to donating their income to charitable causes.

In 2006, A-Rod teamed up with the mega-rap star Jay-Z to host a charity poker tournament to aid the A-Rod Family Foundation. A foundation dedicated to helping and supporting the life, education and mental health of distressed families.

The event raised $403,862 for charity; however, the IRS reported that only $5,000 went to Jay-Z’s Shawn Carter Scholarship fund, and $90 to a Little League Baseball team in Miami. Dodger’s pitcher Josh Beckett and Ravens receiver Anquan Boldin were also singled out for their measly mannerisms.