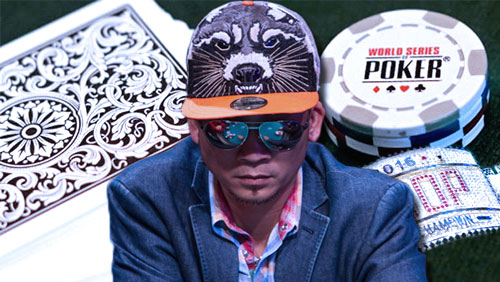 The greatest poker tournament in the world is the graveyard of so many wonderful stories.

Doyle Brunson winning consecutively in 1976 & 77 with the same winning hand of ten-deuce is one of them. Stu Ungar doing the same in 1980 & 1981 is another. His return, 16-years later, to win a third, is probably the most incredulous of them all. The Comeback Kid was dead within a year.

In 1982, Jack Strauss had a chip, a chair, and a few days later $520,000 and the title that all poker players covet. A year later, and Tom McEvoy became the first player to take it down after qualifying via a satellite.

Johnny Chan became the first non-American to win in 1987. He did it again in 1988. He nearly did it a third time in 1989, but a young brat by the name of Phil Hellmuth stopped him and became the youngest ever to win it.
In 1994, Russ Hamilton was on top of the world. In 2005, he decided the top of the world was where he wanted to stay when he decided to play God on the Ultimate Bet network earning over $22m to help maintain his clouds, harps and pearly gates.

In 1998, Scotty Nguyen told Kevin McBride that should he call it was going to be all over. He did call. It was all over. Baby. Chris Moneymaker qualified for just $82 playing online in 2003 and went on to win $2.5m sending swathes of players to their laptops to try and copy him. In 2004, the attendances tripled to 2,576 players and Greg Raymer won $5m.

Jamie Gold won the biggest one of all in 2006. 8,773 people, and a $12m first prize. The following year Jerry Yang won, decided to give a large chunk to charity and then several years later was kind of wishing that he didn’t.

In 2012, Greg Merson defeated his battle with drug addiction to win it. And in 2014, Martin Jacobson received $10m for winning it and decided to donate $250,000 to reduce the suffering of animals.

And here we are again, writing another story, celebrating a new hero.

It is, of course, the World Series of Poker (WSOP) Main Event.

6,737 players created a prize pool of $63,340,268. It is the fifth highest attendance since the poker community decided to give Johnny Moss the title in 1970 because they were too wrapped up playing cash games they couldn’t find the time to host a tournament to pick out a winner.

It was a year remembered for two things. The mouth of William Kassouf and the sheer number of top quality pros that made the business end of the competition.

The Clash of the Titans

William Kassouf’s voice box was ripped out his throat in 17th place, Jared Bleznick left one place later, Thomas Marchese departed in 14th, and James Obst was sent down under in 13th place.

And it didn’t end there with the final table containing quality everywhere you looked and a fairytale in Fernando Pons, a Spaniard who had qualified for the event playing online at 888Poker and had never before visited Las Vegas.

Here were the chip count at the start of the final table.

Pons would leave in ninth place after losing an all-in to Cliff Josephy. Jerry Wong would go out in eighth place after running jacks into the Queens of Vojtech Ruzicka, and Griffin Benger would leave in seventh after his A9ss couldn’t out-flop, turn or river Gordon Vayo’s pocket tens.

Kenny Hallaert left in sixth place when his AQcc ran into the AA of Qui Nguyen, and the remaining five players were sent back to their hotels to dream a little bit more about what they would do with $8m.

Upon their return, Ruzicka ran an unsuccessful bluff on Vayo, losing nearly all of his chips, before Nguyen silenced him completely one hand later. Michael Ruane was next to leave when he ran KQ into the AJ of Nguyen, and that left only three, another break, and only one more story left to tell.

The Climax And The Pay Off

Only three players returned for the final day.

It didn’t take long for fireworks.

Nguyen opened the action from the button; Josephy reacted with a three-bet, Nguyen four-bet; Josephy moved all-in, and Nguyen called. It was AQ for Josephy and A4 for Nguyen and the better hand held to hand Josephy a double up in the first hand.

Josephy’s joy quickly turned to agony, however, when he was the victim of a set-over-set hand against Gordon Vayo that saw the two-time WSOP bracelet winner reduced to 8 big blinds, and plant Vayo into the chip lead.

Josephy reacted well by doubling up twice through Nguyen, but it was Vayo who hammered the final nail into the coffin when his K6 defeated the Q3 of JohnnyBax to send him home in third.

It was an absorbing encounter of contrasting styles with the aggressive Nguyen squaring off against the patience of Vayo. Nguyen started the better and eventually took a slight chip lead in a hand that saw him gain two streets of value after flopping top two pairs.

Then Nguyen took a 2:1 chip lead when this happened:

Nguyen continued to press until he had flattened the stack of Vayo to below 30bb. Then a lifeline for Vayo as he doubled up when his AJ overcome K9hh in an all-in and call confrontation.

Then Vayo raised to 8,500,000 on the button, moving all in for 53,000,000 from the big blind. Nguyen quickly called, and the crowd rose to their feet in anticipation of a flop. Nguyen flopped top pair, but Vayo topped a double gutshot straight draw. Vayo is one card away from a Main Event title, but Nguyen managed to drag the pot with a pair of kings and Vayo is eliminated in second place.

And with that the 2016 WSOP Main Event story reached its climax as Nguyen vanquished Vayo to claim the $8m in treasure.

Ok, so it wasn’t exactly a Stu Ungar moment that will be forever remembered in articles like this, fifty years from now, but it will be a story that at least nine players will be spinning from time to time.