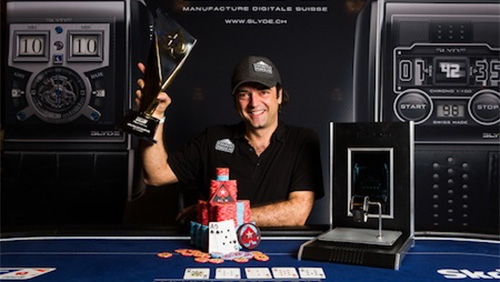 Fabrice Soulier makes sure that he nets another half a million in annual live tournament winnings after capturing the €10,000 High Roller title at EPT Vienna for €392,900.

The Everest Team Pro has just smashed another home run by taking the top spot in the €10,000 European Poker Tour High Roller event in Vienna for €392,900.

It’s the French pros 11th six-figure haul of his career, cementing his place in third spot in the all-time French live tournament rankings behind David Benyamine and Bertrand ‘ElkY’ Grospellier, with over $5.5m in live tournament earnings.

It’s a fantastic title for Soulier. Not just for the money, but for the satisfaction of closing out a contest that contained so many wonderful players, barely six months after the heartbreak of finishing as the runner-up to the Spaniard Adrian Mateos Diaz at the €10,000 World Series of Poker Europe (WSOPE) Main Event in Paris.

It was the largest high roller of EPT10 after 181 entrants (35 re-entries), trumped the original record holder EPT Barcelona by just one entry, and it created a total prize pool of €1,773,800.

Soulier managed to duck, dive and deck his way through a final table that included the experienced Vitaly Lunkin and the former EPT Champion Benny Spindler.

The heads-up action saw Soulier start with a 2:1 chip lead over Anatoly Filatov, and the final hand saw the latter calling an all-in from Soulier, in a race that saw the Frenchman’s [As] [5s] outlast the [Ks] [Th] of Filatov to earn Soulier his fourth largest score of his career.