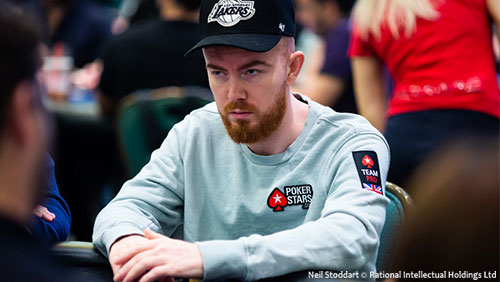 Lee Davy spends 20-minutes with the PokerStars Ambassador, Jake Cody, to talk about his hometown of Rochdale, his inner conflict on being more outspoken, and more.

When I Google the word Rochdale, I learn that the outdoor market will no longer open on a Friday. The Operations Director in Rochdale’s Development Agency said it’s down to low trading numbers.

I imagine Jake Cody pretending he’s a 5,000 lb white rhinoceros, running around that market, with a thorn from a rosebush stuck to his nose with spit. Who would have thought back then, watching his mother picking up trainers he didn’t want to wear that he would make millions of dollars playing cards.

Cody seems in a happy mood, so I don’t tell him about the market, asking, instead, how it feels to go back home?

“It’s funny because it looks like the same place. The names of the shops have changed, but they are still the same shops,” says Cody. “It feels like it hasn’t changed whatsoever. There is a love-hate thing going on. I think it’s a bit of a shit hole, but I do love it too, I have a lot of great memories there.”

I ask Cody if he feels a few inches taller when he goes back after spending the past decade travelling around the world experiencing decadence.

The PokerStars Ambassador has done it all in poker, but what did his mother want him to be when he was a nipper?

“My Mum is a bit of a hippy; an art teacher. I am a logical thinker, so we have very different skill sets,” says Cody. “She was happy for me to do whatever as long as I was happy. I don’t think she had a set career plan in mind for me; she was always supportive of anything I did. As long as what I did made me happy, was positive and I was passionate about it.”

Cody’s mother raised him in a single parent household, and I ask him how the absence of a father has impacted his life both positively, and negatively?

“It’s so difficult because it could have been both a negative and positive experience,” says Cody. “You don’t know how your life would have changed had your family environment had been different. It’s hard to judge. I think if you grew up missing one parent you always longed to have them there. You are a bit sad about it and think it could have been better. But then, when you think about where you are, today, you wouldn’t be there if it wasn’t for that single parent. And they probably weren’t together for a reason, so maybe them sticking together in the same household and environment probably wouldn’t have been a good situation for anyone. I am going through something similar with my daughter, right now.”

It’s not until you become a father that you can find empathy for your father.

“Unfortunately, me and my ex have broken up, and I feel like I have followed in my Dad’s footsteps a little bit, and sometimes I hold a little resentment towards my Dad, and I feel bad that potentially that could happen to me too, and I don’t want to make the same mistakes. You want to do a better job than your parents did, really.”

I ask Cody how Rochdale has marked him?

“I think I have lost my accent a little bit,” laughs Cody. “If I went back to Rochdale, and hung around my friends again, the twang would come back. Not that I put on a different accent when I am away, but I slow down a lot, particularly in America, because I speak so fast it’s difficult to understand me. The friendliness hasn’t left me. I think Northerners are very sociable and want to be open and chatty with people. I am shy in some scenarios, but overall I want to be sociable and talk to people, and that comes from Rochdale.”

Cody is more reserved than most if you don’t know him that well, so that made his Twitter outburst against the Poker Night in America (PNIA) commentators unusual when he spoke out in defence of their comments against amateur players, back in October.

“I thought it was distasteful,” says Cody. “I should use my voice in poker to do more things like this. Rather than sit on the fence, I should say things when things aren’t right. I thought the best way to bring attention to it was to draw attention to it on Twitter. I think it’s a nasty thing to do, to say something like – ‘disgraceful play from an amateur,’ when you would think he’s excited to be there, all his friends and family are watching, and now he’s being mocked by them. I thought it was gross.”

What was it about the incident that touched Cody, though?

“I don’t really know.” Says Cody. “I guess I have been feeling more feisty recently, and that came out a bit. There are times where I feel like I have a lot to say, but I don’t have enough confidence and am too shy to say something. I am trying to take steps towards saying the things I want to.”

I mentioned to Cody how angry I was that a section of poker players spoiled the Comedy Night for me, in the Atlantis, and how upset I was for not saying anything to them. I was afraid of the reaction. Is that what holds Cody back, fear?

“A little bit yeah,” says Cody. “And a little bit worried about people judging me for saying something. Overall, I am a positive person, and I want to bring positivity to people, and it’s sometimes not a great look when you’re saying negative things, and calling people out like that, but I think there is a time and a place for it.”

I wonder how Cody would handle it if his comments resulted in a flood of hate on Twitter?

“I am not sure, maybe I wouldn’t handle it well, and I think that’s why in the past I have shied away from those scenarios,” says Cody. “As I said, I am trying to take steps to be less like that, but whether I would want to go the whole way, and be completely outspoken about everything, and be super-opinionated, I probably wouldn’t.”

We had one reaction in October 2018, and one recently, after Kenny Hallaert posted a tweet about a poker player’s behaviour during the PCA, only for the tweet to be deleted. Cody commented, and I ask him about it.

“He {Hallaert} was calling out {Chris} Vogelsang for wearing something that was hiding his neck,” says Cody. “Vogelsang gets a lot of stick for this, and it’s somewhat called for, but also he is a super nice guy. I think it’s harsh to call him out on it, I think what people wear at the poker table doesn’t matter that much, and I was commenting that slow play is the bigger problem, and is becoming a trend. Vogelsang, as nice as he, is one of the biggest perpetrators of that. Who cares what you wear, but don’t slow the game down to an extent where people are getting bored and restless, it ruins their experience. People want to play lots of hands, and play against the best players, and if they stare them out that’s fine, but don’t take a crazy amount of time over small decisions.”

I suggest that the shot-clock is the answer, Cody doesn’t agree.

“Sometimes the shot clock can also slow the game down,” says Cody. “People think, ‘Ok I have 30-seconds to act’, with that in mind, nobody is ever going to be happy. I think it’s a difficult one to solve.”

There was also a comment about how ambassadors should behave with amateurs at the poker table that I question Cody on.

“As a pro, I don’t think you should be inclined to make conversation with amateurs if that’s not your personality,” says Cody. “But if you are talkative, and you want to be friendly then be authentic. When a qualifier or an amateur comes into the field, I would think they want realness not fakeness, whatever form that brings. Even if that means a German elite pro is not talking to anyone, playing unbelievable poker, they would be excited to play against that as much as they would want to play against someone chatty like Daniel Negreanu.

“I always try to be nice to people. If the table is completely silent, I am not the person who starts the conversation, but if people start talking, I will get involved. That’s how I am in life; I don’t force things.”

Trust seems to be a big issue for Cody.

“I am guarded in a lot of ways in life,” says Cody. “I have a few layers to remove before you get to know me. I am friendly with a lot of people but at different levels.”

Cody attended the Right to Play charity event in London back in November, and he’s also visited Africa on behalf of Helping Hands. I ask him to talk about how serving others and philanthropy has evolved in his life beginning with his youth in Rochdale.

“For me, growing up, it was super working class with a single mum. We had nothing growing up, so we didn’t have anything to give to anyone. Now, where I can make a difference, and have a voice in poker, and are lucky enough to be invited to things by Right to Play, I can see the struggles that people go through, and it changes you. I am torn by it. If you engross yourselves in their lives, and realise how lucky and blessed you are it makes you want to give away everything.”

“Splurging money in certain scenarios that are not needed, like a big night out in Vegas or buying expensive trainers,” says Cody. “Things you don’t need. I got thrown a lot of money at an early age that I wasn’t ready for. I wasn’t thinking about it; I was just riding the wave.”

Poker players come and go. Who has gone that Cody misses?

“Although a lot of people go, they don’t really go,” says Cody. “I think it’s difficult for someone to leave the poker world fully. Pez {Matt Perrins} I see a lot less of him – one of my childhood best friends, and I miss having him around. I have been around the EPT scene for so many years, I have seen a lot of friendship groups come and go or merge. From my original friendship group, there aren’t that many who consistently come to a lot of things these days, and it’s kind of sad.”

I ask Cody if he ever feels lonely in poker?

“No, I never feel lonely because I have so many friends,” says Cody. “I will always have people to hang out with. I will never be stuck to have someone to go out to dinner with or hang out with.”

So was that Friday market.