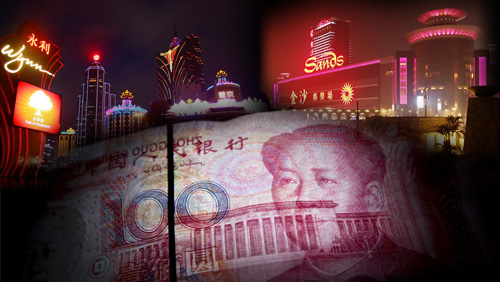 Do you remember that scene from Forrest Gump where Gump’s shrimping boat goes out in a wicked storm, and his is somehow the only boat to survive? Soon afterward Gump becomes a multimillionaire as he is the only one with any capital left and shrimping becomes easy.

The movie does not make it clear why his boat was the only one to survive, but let’s be creative and conjecture that Gump didn’t have much equipment on board, not really knowing what he was doing, so his boat was extra light in the face of the monster storm. Lesson being, if you see a storm on the way, make sure your shrimping boat is light. You may just escape the onslaught and come out rich on the other side.

So what is the oncoming storm, and how will corporations survive it? The storm is interest rates. They are about to go a lot higher, sinking the companies (and governments I might add) with the highest debt burdens, sparing the ones with the lightest loads. And the eye of the storm looks like it is developing in China. Taken together, this has profound implications for the Macau casino scene, but anyone who knows what to look for may yet be able to pick the right boat to survive the storm and thrive.

There are several factors at play here, all coming to a head. First let’s go over some basic Austrian Business Cycle Theory, otherwise known as ABCT. When a central bank creates new money to buy bonds, that money has the effect of artificially lowering interest rates. Lower interest rates in turn have the effect of encouraging long term investment. If borrowing money is cheap, more people tend to do it, encouraging businesses to engage in long term projects that take a lot of time to complete.

While these projects are being completed, the economy undergoes the “boom” phase of the business cycle. The economy tends to speed up generally as demand for labor rises to complete the long term projects. But there’s a problem. Since interest rates were lowered artificially through money creation instead of real savings, the demand to match these long term projects is not actually there. The overinvested boom economy does not have matching consumer demand for what it produced in the boom, and the “bust” phase ensues. According to ABCT, the bust isn’t the problem. The boom is. The bust is the inevitable solution to rebalancing the economy.

Think of it like this. Say I print $100,000 to buy a Ferrari. The owner of the Ferrari dealership now has $100,000 more, interpreting this as real demand for his cars. But that’s not enough to sustain a trend. So say I counterfeit $70 billion every month and buy Ferraris with it (or Treasuries, as the case may be). The owner of the dealership now has a LOT more money, and he uses it to massively expand his business to meet the demand he thinks is there. But it’s not real demand. It’s just me printing money. While he’s expanding and I’m buying his cars, that’s the boom for the dealer. But say I stop printing because I’m afraid of causing inflation. All of the sudden the Ferrari dealer is in very big trouble. He has all these expenditures he made in order to expand his dealership with no real demand to match it. He now has to sell his cars for way below cost in order to find buyers. There’s the bust.

While money supply is expanding and interest rates are trending downward, the boom seems sustainable. But eventually the money printing slows or stops completely, and when that happens, watch out, especially when it stops abruptly.

I’ll give you three examples. Take a look at this data. It looks dry, but stay with me. Here you’ll find the M2 numbers all the way back to 1959, loosely representing liquid money supply, sort of like the share float if you equate one dollar to one share of “stock” in the economy. What is important here, and there are numerous ways to calculate this as long as you stay consistent with your formula, is the trend changes in growth rates, roughly the derivative of the money supply curve for calculus buffs. The last time there was a wild fluctuation in the growth rate was from February to April 2008, when annualized growth each quarter was around 10%, dropping precipitously to around 3% in the fateful month of August 2008. We all know what happened then. Another wild gyration downward occurred in July 2000, the top of the secular bull market in stocks back then, when annualized growth suddenly slowed to 2% after having been in the 6-8% range since 1997.

Another interesting historical period in money growth gyrations was in March-September 1987, when growth averaged around 3% annualized, but followed an average growth period of 9-10% from May 1986 to January 1987. That 7% quick drop in money growth was followed by Black Monday, October 1987. This is not an exact science, but it can give you a good idea of what can happen if money printing slows quickly. Imagine you are the Ferrari dealer, merrily expanding your business when suddenly your money-printing client dramatically slows his printing. What happens to the price of your cars? It crashes.

Here’s where we get to interest rates. The Fed doesn’t buy Ferraris. It buys bonds. When it does that, it pushes the price of bonds up, lowering interest rates. But at some point it is going to have to stop. Right now there is about $2.5 trillion in excess reserves just sitting there doing nothing outside of the economy,more than in any time in history. The Fed calls it “Reserves Maintained that Exceed the Top of the Penalty Free Band.” (See the link.) Leave it them to be longwinded. The Fed cannot just keep piling that on. That amount is more than staggering, as with our 10% fractional reserve system, $2.5 trillion in excess reserves equals roughly $25 trillion in loans, 6x the current monetary base. These numbers are just off the wall and can’t get much crazier. When the Fed stops buying bonds, and it will have to soon, the price of bonds will fall very quickly.

Where does China fit in? China’s Fed, The People’s Bank of China, AKA the PBOC, has made it clear since November that they are no longer interested in buying US Treasuries either. Tie that together with recent Chinese liquidity drains and it is a recipe for a very powerful and thorough bust with skyrocketing interest rates. If the PBOC doesn’t want a bust, why are they slowing the presses? Because they fear inflation.

And what does this mean for Macau? It means that Macau Casinos with heavy debt burdens and no hedge against floating interest rates will get fleeced in the perfect storm. Others may well end up being Forrest Gump’s surviving Jenny shrimping boat and reap the benefits.

Let’s take a look at some of the big boys. Las Vegas Sands (LVS), long term debt of $9.4B as of its last filing. That’s a debt to equity ratio of a little over 13%. Doesn’t sound too bad, but the more important question is how much of that debt is unprotected against a rise in interest rates? The answer, it appears, is almost all of it. (See page 65 at link.) LVS has almost no insurance against a precipitous rise in interest rates, despite its currently manageable debt to equity ratio.

Now take a look at Wynn. $6.6B in long term debt, debt to equity of 27%. This seems to be a much higher debt burden than LVS, but not so fast. Wynn is well protected. According to its last 10-K released only days ago, 96% of all debt is fixed-rate. Despite having a higher debt burden to equity, Steve Wynn is in a much better situation than Sheldon Adelson if interest rates do start to skyrocket with China at the epicenter.

What I’m getting at is the debt numbers are not always what they seem, and it pays to see who has interest rate insurance and who doesn’t. These two examples are illustrative, and I leave it to you to dig deeper. In the end, those caught with their pants down flirting with low premiums on floating rates will end up in big trouble. Those insured will have a rough time initially along with the rest of the economy, but when they pull through and the storm subsides, shrimping will be easy.

Let’s not forget the perfect example of Southwest Airlines (LUV) in its own industry. This eerily prescient piece published July 2008 on Southwest’s mastery of jet fuel price hedging pulled the airline through the commodity bubble and oil price spike leading up to the Great Recession. While giants like American were going bankrupt paying an arm and a leg for floating rate fuel, Southwest remained profitable by insuring against rising fuel costs and securing its fuel contracts years in advance.

Rising debt costs for the Casino industry, especially in Macau where ground zero may very well prove to be, will separate the men from the boys even more so than what rising fuel costs did for the airline industry. It took some time, but Southwest’s shareholders came away very happy. American’s certainly did not.

In the meantime, keep an eye on interest rates and the M2 numbers, and make sure you know who’s insured against what.