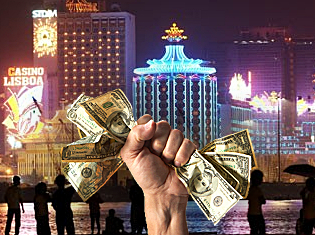 It didn’t take long for Macau’s casinos to reap the rewards of a new year after revenues in February shot up by 40 percent over its year-on-year numbers, wiping out initial estimates in the process.

For the month, casino revenue in the Chinese territory reached a new record of MOP38 billion, bum-rushing the MOP36.5 billion record set in October of last year.

Here’s the thing, though. A lot of experts believed that February’s numbers, backstopped by the Chinese New Year holiday, would be able to come close to the record haul but not beat it out entirely.

But that’s exactly what Macau’s casinos did, generating the kind of money that’s already more than a third of what Nevada earned in all of 2013.

The Chinese New Year holiday is largely responsible for the record-setting month that’s made even more impressive despite February being the shortest month of the year. But even with the lack of days, the week-long holiday at the start of the month saw more than 770,000 visitors from mainland China come to Macau, a 23 percent increase from its year-on-year figures.

The question now begs: how many times will Macau’s monthly revenue take be broken this year? It happened twice last year during March and October and now that we’ve just entered the third month of the year, it’s not out of the realm of possibility that a new record is set for a second time in as many months.

The way Macau has become a magnet for tourists and casino players from the mainland, a MOP40 billion haul in any one of the remaining 10 months of the year is well within play.