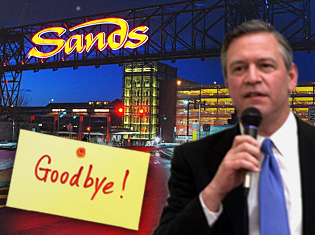 The only president Sands Bethlehem has ever known is saying goodbye. On Wednesday, Las Vegas Sands confirmed that Robert DeSalvio (pictured) had submitted his resignation as president of Pennsylvania’s market-leading casino. Sands president/COO Michael Leven said it was DeSalvio’s decision to walk away from his corner office and that the company was “disappointed” he won’t be around. Leven said Sands was “exploring the best approach to fulfill Bob’s role” but offered no timelines.

DeSalvio, who will stay at his post until March 14, confirmed his resignation to the Express-Times but directed all further questions to the casino. The Morning Call quoted Sands spokesman Ron Reese saying DeSalvio’s exit was unrelated to the recent distributed denial of service (DDOS) attack on Sands Bethlehem’s website earlier this month that knocked multiple corporate sites offline and exposed personal information – including social security numbers – of many Sands Bethlehem employees. Last week, the hackers posted a video to YouTube displaying the data they’d purloined, which led Reese to issue a statement saying at least some of the company’s internal drives in the US had been compromised.

Sands Bethlehem has been a runaway success since it opened in 2009 with DeSalvio at the helm. The casino earned nearly a quarter of the state’s total table game revenue in 2013 and placed second on the annual slots revenue chart behind the Parx casino in Bensalem. Before joining Sands, DeSalvio did a stint at the Foxwoods Resort Casino in Connecticut.

In September, state gaming regulators fined Sands Bethlehem $56k for letting underage visitors get their gamble on. Sands chairman Sheldon Adelson likes to claim that online gambling sites are inept at preventing kids from gambling but DeSalvio told gaming regulators in October that verifying the legitimacy of every fake ID was basically impossible. DeSalvio suggested the state should help out by confiscating the offenders’ drivers licenses for one year on a first offence, not unlike state Rep. Mario Scavello‘s recent call for online gamblers to serve a year in jail for a second offence. Must be something in Pennsylvania’s water…