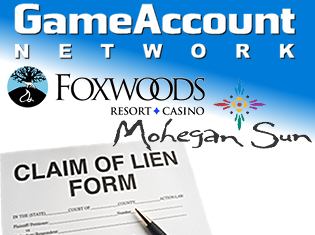 The Foxwoods Resort Casino in Connecticut has launched an online free-play casino powered by Alderney-licensed GameAccount Network. The launch of the FoxPlay site marks the first fruit of the deal the two companies inked last April to collaborate on all things online gambling. FoxPlay offers over 50 slots and table games from the GameAccount library, and is accessible via desktop or Android/iOS/HTML mobile options. Players get a certain number of virtual chips every 24 hours but can buy extra virtual chips, the purchase of which will earn points on players’ Foxwoods rewards cards but the chips themselves cannot be cashed out for money or money’s worth.

The debt collection practices of Foxwoods and its Connecticut casino rival Mohegan Sun have raised eybrows across the border in Massachusetts, where both casinos are competing for a coveted casino license. Over the weekend, the Boston Globe reported that both Connecticut casinos had a habit of placing liens on property belonging to gamblers who’d failed to repay markers they’d run up at the gaming joints. The Globe calculated that the casinos had placed “dozens” of liens on gamblers’ homes since the early part of the last decade, over debts ranging from $6,400 to $66k.

Some of these debtors were Massachusetts residents and the news has led to questions about how each casino decides to issue significant credit to gamblers. Foxwoods declined comment, but a Mohegan Sun rep denied that its debt collection practices were “somehow more aggressive than other gaming companies,” noting that Nevada allows its casinos to file criminal charges against deadbeats, as two Vegas casinos did recently against Canadian businessman Semion Kronefeld.

It’s too soon to tell if the bad press will negatively affect either casino’s shot at winning a Massachusetts license, but the brouhaha has prompted Massachusetts Attorney General Martha Coakley to ask state gaming regulators for a ban on gambling-related liens in the state’s as yet unwritten casino regulations. A Gaming Commission spokesperson said the idea would be discussed at a future meeting, which begs the question: if the Gaming Commission publicly shames the Connecticut casinos over this, will chairman Stephen Crosby get hit with yet another lawsuit for interfering with the bidding process?

Mohegan Sun has partnered with Suffolk Downs racetrack on a bid to build a casino in Revere. Their opposition comes from Wynn Resorts, which has also staked its claim in the Boston area. Late last month, Foxwoods proposed a $750m resort casino in Fall River after Milford voters rejected Foxwoods’ bid to set up shop in their little corner of the world. Foxwoods is battling the Mashpee Wampanoag tribe, who were believed to have the inside track on the state’s southeastern casino license but have run into difficulty getting the Department of the Interior to agree to take the land on which they wish to build into federal trust. MGM Resorts appears on track to get approval for the sole license up for grabs in the western part of the state.