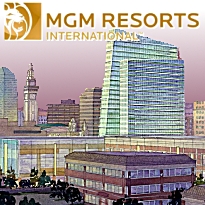 See, MGM’s the last one left among all those operators that voiced their interest in Western Massachusetts. But each one of them has dropped for one reason or another, leaving MGM as the lone survivor, so to speak.

So with little resistance in its way, MGM officially made its final presentation to the Massachusetts Gaming Commission and as a change in discourse over the contentious presentation of Wynn Resorts, MGM was a little more relaxed in its final pitch to build and develop an $800 million resort and casino in Springfield that it is already proclaiming to the high heavens as a “game-changer” for Springfield.

CEO Jim Murren and President Bill Hornbuckle were both in attendance during the presentation, each taking their turn in touting the company as one of the standard bearers of the US casino industry with a plan to revive and inject some life into the veins of one of the country’s oldest cities. Perhaps Springfield Mayor Domenic Sarno, who was also in the presentation meeting, said it best when describing what MGM could do to revitalize Springfield, breathing a new life into the city on its way to its own personal renaissance.

As part of MGM’s pitch to the commission, the company threw just about every promise they could, detailing how the company isn’t just prepared to spend that kind of dough, but also doing it while keeping in mind the objective of revitalizing the city and giving its residents something to be proud of once again.

“If we don’t bring Springfield back, we’ve wasted a great deal of time and energy and $800 million trying,” Hornbuckle said, as quoted by The Republican.

Not surprisingly, MGM has made a lot of promises to the city of Springfield as far as the development of the casino goes. Employment opportunities will be there for the taking with the operator estimating that the casino could open up at least 2,000 construction jobs while also meeting conditions set by an affirmative action program.

As soon as the casino opens, MGM promised to hire at least 3,000 employees, including 2,200 full-time employees. In connection with its planned hiring framework, MGM has also guaranteed to use what it calls its “best efforts” to hire local Springfield residents, at least 35 percent of its total workforce.

Steps are likewise being taken by the company to partner with a host of local colleges and tech institutes to ensure that the skills required by its prospective employees are being learned early and often. “We’ve already signed several memorandums of understanding to support training for unemployed and underemployed citizens in the region,” Kelley Tucky, vice president of public affairs said.

MGM Springfield hopes it can talk the city into cutting it some slack
Erik Gibbs
14 July 2020
.