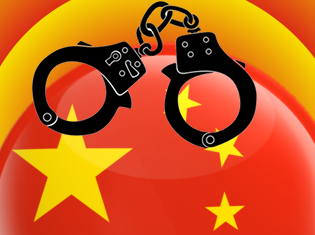 We’re one week into China’s latest crackdown on vice – gambling, prostitution, drugs, free speech, etc. – and the street-sweeping shows little sign of letting up. The Chinese media is awash with reports from various provinces, crammed with statistics on number of places raided, arrests made and items of contraband confiscated. Each region’s public officials are apparently trying to outdo one another to demonstrate their adherence to Beijing’s call for an end to bad behavior.

Hong Kong media outlet Wen Wei Po talked to a police official in Guangdong province’s Chaoshan region whose efforts were focused on taking down online gambling sites serving local punters. The officer expressed frustration at attempting to identify and arrest the hundreds of local agents working for large online operators. Further frustrating his efforts was the practice employed by some online sites in which punters innocently buy online credits for free-play gaming sites that can also be used at real-money betting sites and which could be redeemed for cash at local retail outlets. A joint operation by police in China and Taiwan took down such an operation shortly before Christmas.

Wen Wei Po also indicated that some of those caught up in the illegal gambling dragnet in Chaoshan included public officials. Earlier in the week, the director of forestry police in Qingyuan in northern Guangdong was removed from his post after reportedly running up a RMB 1m (US $164k) debt from placing online wagers on football. Ling Ziqun reportedly lost RMB 800k in a single week’s worth of wagers in September, then lost a further RMB 2m, which prompted him to borrow RMB 1m from a man named Deng. A man named Zheng agreed to guarantee Ling’s debt, but when Ling couldn’t pay, Deng got a court order freezing Zheng’s assets, which prompted Zheng to go public, leading to Ling’s dismissal from the force.

China isn’t the only Asian country where police officials are giving the civil service a bad name. In truly ironic fashion, the former assistant director of Singapore‘s Corrupt Practices Investigation Bureau pled guilty this week to misappropriating S$1.76m (US $1.4m) of bureau funds to pay his gambling debts. In just a couple years, Edwin Yeo Seow Hiong lost close to S$480k gambling at Singapore’s two integrated resort casinos and a further S$264k via the Singapore Pools sports lottery. The 39-year-old Yeo pled guilty to three charges of criminal breach of trust and one charge of forgery, for which he was sentenced to 10 years in jail. Only around S$100k of the misappropriated funds have been recovered.