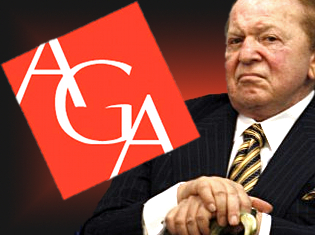 Casino operator Las Vegas Sands may quit the American Gaming Association (AGA) due to Sands chairman Sheldon Adelson’s hatred for online gambling. Asked by Politico contributor and Nevada journalistic mainstay Jon Ralston how Adelson reconciled his anti-online stance with the AGA’s new emphatically pro-online position, Adelson said he was “considering withdrawing from the organization … You must understand, I don’t want our dues going to hurt our society.”

Adelson told Ralston that the key to getting where he is today was having the courage and belief of his convictions. Adelson’s comments about online gambling’s capacity to “hurt our society” match well with previous assertions that his primary objections lay on moral grounds. But Adelson also fears tech giants like Google or Facebook, which have “a billion customers hitting them every day.” Adelson thinks companies like these will eventually enter the online gambling business and “squash the other guys like… you squash the little ant running across the table.”

Adelson verbally squashed the enthusiastic online gambling push of AGA member Caesars Entertainment, essentially saying the debt-laden Caesars was like a drowning man grasping at any potential life preserver and/or revenue stream. Adelson told Ralston that Caesars was “completely broke” and their inability to turn a profit has left him unsure if “they know what they’re doing.”

Not to be outdone, Caesars CEO Gary Loveman told Ralston he’d been puzzled by how Adelson had gone from “not enthusiastic about” online gambling to deciding to “have a jihad on the topic” in the space of 18 months. Loveman also suggested that Adelson’s mantra about not being computer savvy made him “an internet virgin” who “does not know what he is talking about.”

ONLINE GAMBLING POPULATED BY CROOKS FROM TOP TO BOTTOM
While Adelson told Ralston he’d been “apolitical my entire life,” the 28 Billion Dollar Man famously blew over $100m backing the failed candidacies of various GOP hopefuls in the 2012 election cycle. Suitably impressed, a Pennsylvania Republican is seeking to block state efforts to legalize online gambling by making online gambling a criminal offense, punishable by up to a year in jail for a second offense. In unveiling his ‘clap them in Irons’ act on Tuesday, state Rep. Mario Scavello said the idea was to “hit people in their wallets,” after which the traffic to online gambling sites will dry up in no time, just like how everyone stopped drinking during Prohibition.

Scavello clearly possesses the attributes that earn one a post-politics gig with Adelson’s Coalition to Stop Internet Gambling (CSIG). On Wednesday, former New York governor and current CSIG hired gun George Pataki went on CNBC to utter lots of truth-challenged CSIG talking points about organized crime, terrorism and locusts. Pataki kept stressing how some of the criminal gangs getting fat off online gambling were “transnational” which by the end of the interview started to sound like he was saying “transvaginal.” (He is a Republican, so easy slip.)

The CSIG also unveiled its official list of supporters on Wednesday, a prim and proper roster of 39 predominantly faith-based groups and true patriot types. In response, the AGA’s counterinsurgency lobbyists from the Coalition for Consumer and Online Protection (C4COP) unveiled their own list of big name backers, including Lindsay Lohan, Satan and the zombified remains of Osama Bin Laden. (Only the first half of this paragraph may be strictly accurate.)

Adelson may not have got much for his $100m in 2012, but the experience clearly didn’t sour him on backing losers. The public bickering between Adelson’s camp and his erstwhile AGA brethren is a lot like a presidential primary and/or a monkey fight, in that both sides end up covered in fecal matter. With New Jersey’s nascent online gambling market doing okay for the moment but nowhere near Gov. Chris Christie’s nine-digit tax revenue projections, Adelson’s campaign ensures that states will have even less incentive for changing the status quo on an issue so politically toxic.