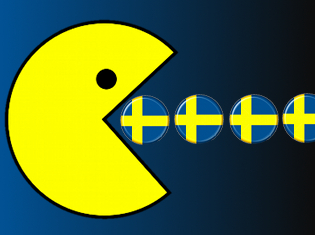 Sweden’s gambling market contracted in 2013, the third straight year in which betting turnover has declined. Figures released by the state Lotteriinspektionen said total turnover in 2013 came to SEK 46.8b (US $7.2b), down 0.3% from 2012’s tally. Total revenue by Swedish-licensed gambling operators came to SEK 17.3b, but revenue flowing out of Sweden to internationally licensed online sites like those Betsson bastards rose 2% to SEK 2.3b. Spending per household on gambling held steady at 2.64% of disposable income, around SEK 6k per adult.

The non-casino operations of state gambling monopoly Svenska Spel claimed the largest share of the regulated gambling revenue pie at SEK 8.6b. Svenska Spel’s Casino Cosmopol operations, which were broken out into a separate ranking this year, reported revenue of SEK 1.1b, roughly on par with 2012. Horseracing operator ATG’s revenue came in at SEK 3.6b after turnover fell 2% to SEK 12.1b. National lottery turnover hit SEK 5.7b, with the Postcode Lottery earning revenue of SEK 2b, (+16%). Restaurant casino turnover fell 7.5% to SEK 458m and bingo turnover came to SEK 1b.

Sweden has waged a similar war against international operators, particularly over their right to advertise their wares with Swedish media outlets. Section 38 of the Swedish Lotteries Act prohibits lotteries “of foreign origin” but the government is now planning a consultation to determine ways to revise national legislation to explicitly bar such advertising.

Swedish media outlets have countered that Sweden’s gambling monopoly is itself contrary to European Commission edicts, which permit such monopolies only if their primary mission is to minimize their citizens’ gambling habits. Svenska Spel has dramatically increased its promotional efforts in recent years, a trend critics say amounts to encouraging Swedes to gamble more in a bid to boost the state’s tax revenue, which hardly resembles the actions of a body trying to keep a lid on such activity.