Home / Sports / Bouncing Balls: The View From The Good Seats 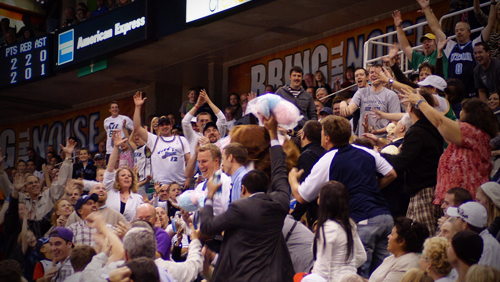 I’ve been to probably 80 or 90 Oklahoma City Thunder games since they moved from Seattle. My normal seats are in either section 301 or section 315, high up behind the basket. Those are the cheap seats, of course; and, on occasion, they’re free. (The Thunder have a pregame lottery for free or discounted tickets, even for playoff games.)

That’s not a complaint; I rather enjoy those seats. They give an ideal view of the offensive and defensive schemes, and as most people say, that’s where the ‘real fans’ sit. Any asshole can watch a game courtside – just look at Justin Bieber – but it takes dedication to sit in the nosebleeds.

That said, every now and then the chance comes along to sit down where the action is. I got such a chance last month, when back home in Oklahoma City. I headed downtown to scalp tickets for a game against the Orlando Magic, figuring that, even on a Sunday night, there’d be a few tickets. And I managed to get a single fifth row seat for half the face value – some eighty-three dollars. (Cue everyone in New York, San Francisco, and Chicago throwing up in their mouths.)

At the risk of bragging, it was the best seat I’ve ever had for a professional basketball game, and I certainly enjoyed it. And I learned a few lessons that I’d thought I’d share, particularly since if I write a column about it then I can write off the eighty-three dollars I spent on the ticket, as long as I can find that scalper and get a proper receipt. In no particular order, some of the major lessons I learned in the fifth row:

People in the lower level are kind of assholes. There are times in the upper deck when you catch a glimpse of the lower level from up top, or see some jerkoff on the Jumbotron playing on his phone ten seconds before a key play at the end of the game, and you think, “Those people probably suck.” You’re not wrong. They don’t cheer, they don’t yell, they don’t stand. They get there halfway through the first quarter, and they leave halfway through the fourth, even in Oklahoma.

Of course, think of it through their eyes. They have those seats any time they want, most likely through work. They work long hours; they have children; they have mortgages and responsibilities. If they leave with five minutes left in an eight-point game, who can blame them?

You know who? Me. It is unbelievable sitting that close. The difference between the fifth row and the fifteenth row is the difference between high-def and black and white. Everyone should do sit there as often as they can. And if you have the opportunity, and you leave, well, go f— yourself. Because…

But in the good seats, you might see Kendrick Perkins jump off the bench to argue a call with a ref during a break in play. You might be able to read the ref’s lips well enough to see him say, “Sit the hell down, it wasn’t even my call.” And you might see Kevin Durant laugh out loud in response.

Towards the end of the game, Russell Westbrook went up alone for a defensive rebound. Instead of grabbing the ball simply, he tried to reach back and slam the ball together between his hands; unfortunately, the ball slipped away, out of bounds. During the next break in play, Westbrook stood under the same basket and stared at it for a second. “Shit,” he muttered, then jumped and physically replayed the unforced error from a few minutes prior. He jumped, landed, and dropped a twelve-letter curse word before shaking his head.

These are the types of things you get to see in the fifth row. This is why it might have the best eighty-three dollars I’ve ever spent. And this is also why it’s perfectly acceptable to watch someone leave their third-row seat with three minutes left in a six-point game and hope they hit a telephone pole. And it’s also proof of one more thing:

NBA players play hard. Really f—ing hard. I’ve heard the complaint a hundred times: “College basketball is better because NBA players don’t play hard.” Bull-shit. Watch Perkins – all six-foot-nine, 275 pounds of him – throw an elbow under the basket. The average man would be on the ground with a cracked sternum and a pint of blood in their mouths. Watch Perkins jump off the bench to argue a call, or Westbrook spit curses over an unforced error, or Durant look like a broken-hearted teenager every time he misses an open jumper.

You don’t even have to watch. You just need to listen – to listen to the sound of the world’s best athletes crashing to the floor. On occasion, it’s like watching a two-year old; they fall so often and so hard you’re convinced at some point they’re going to get seriously hurt, yet somehow they shake it off and head to the free throw line. Anyone who says, “NBA players don’t play hard,” should just hear that sound one time. It’s a sound you can only hear from the expensive seats – and it’s a sound every true sports fan should hear as often as possible. Just make sure you don’t leave early.