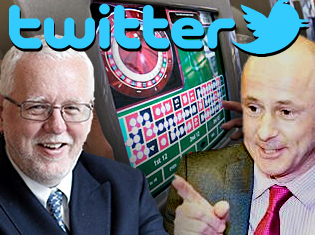 The debate raging in the UK over fixed-odds betting terminals (FOBT) has claimed its latest victim: the Twitter account of William Hill CEO Ralph Topping (pictured on the left). Early in this new year, Topping joined a flame war raging between Hills’ public affairs manager Andrew Lyman and representatives of the Campaign for Fairer Gambling (CFG), the Derek Webb-backed lobby group seeking to rid the UK’s high street betting shops of the (alleged) FOBT menace.

The verbal jousting between Lyman and CFG lobbyist Adrian Parkinson (pictured on the right) was sparked by a traditionally hyperbolic Daily Mail article about FOBTs having plotted 9/11 (or something). After watching the exchange for some time, Topping weighed in, noting that his uncle had died in the Second World War “for freedom. He would birl in his overseas grave at its restriction.” Parkinson responded that Topping had “lost touch” with the reality going on in Hills’ betting shops, to which Topping responded by touting his 44-year tenure with Hills and warning Parkinson – himself a former bookie – to “debate with facts not insult.” (Read excerpts of the exchange here.)

From there, the conversation devolved into Topping asking Parkinson to come clean on how much he was being paid to rubbish Hills’ business, while Parkinson questioned whether Topping was too long in the tooth to continue running Hills. The net result of all this sparring was Topping taking his Twitter account private. Hills spokesperson Kate Miller called the exchange “a reasonable debate that is commonplace on social media” and said Topping’s account had gone dark “because he is traveling.” Parkinson countered that the spat had demonstrated that Topping and his ilk were “determined at all costs to maintain an addictive high-revenue product that has turned shops into mini high street casinos.”

COME ON, PARKY…
For the record, Parkinson commented on CalvinAyre.com’s coverage of UK Labour party leader Ed Miliband’s pre-Christmas diatribe against FOBTs. We quoted Miliband saying he was concerned by the fact that gamblers stood to lose £18k per hour given the Category B2 FOBTs’ capacity to accept a maximum wager of £100 every 20 seconds. Parkinson took us to task thusly: “[Miliband] didn’t say “lose” £18k an hour – he said “bet up to”. Makes a difference in the way you present it, or is that intentional?”

For the record, the Daily Mirror article in which Miliband unveiled his anti-FOBT platform – which the CFG links to from its own website – opens with the following text: “In an exclusive interview with the Daily Mirror, the Labour leader says he will bring in laws allowing councils to ban fixed-odds terminals from betting shops. Punters can lose up to £100 every 20 seconds on the machines – branded the “crack cocaine” of gambling.” [Emphasis added.]

We apologize that the Mirror apparently misrepresented Miliband’s beliefs, but we can’t help wondering why Parkinson has yet to leave a snarky hair-splitting comment at the bottom of the Mirror’s article. Or was that intentional?

Finally, any mention of betting and Parkinson wouldn’t be complete without this classic clip. (Parky appears to be a somewhat humourless individual, so we’ll stress that is not to be taken as suggesting he visit any tall buildings anytime soon.)