Dominik Panka keeps the Chris Moneymaker style dreams alive by defeating 1,030 other players on his way to the $1,423,096 first prize at the PokerStars Caribbean Adventure (PCA), after qualifying for his seat playing a $700 Mega Qualifier on Stars. 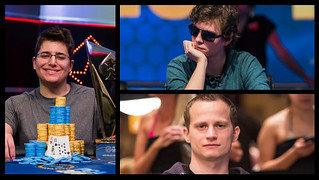 Panka became the first Pole to win an EPT event after stopping Mike ‘Timex’ McDonald from becoming the first player to win two EPT Main Event titles when he beat him in heads-up action.

It was a remarkable story of David v Goliath proportions. Panka with just two live tournament cashes to his name, totaling $8,092, squaring off against one of the most talented players in the game; and once again the stone proved to have more speed and accuracy than the sword.

The eliminations started with Fabian Ortiz who left in eighth place after getting it in unsuccessfully AK<QQ of McDonald. The we lost the dangerous Pascal LeFrancois in a flip against Isaac Baron 66<AK when an ace arrived on the turn.

Shyam Srinivasan was eliminated in sixth place, much to the delight of the bloggers who had to concentrate on not spelling his name wrong, and all I can say is ouch. Srinivasan dominating Panka JJ v TT until a third ten on the flop sent the unfortunate Srinivasan to the rail.

Daniel Gamez was the next player to feel the weight of the McDonald sword. Once again it was all-in and call with Gamez holding QThh and McDonald’s pocket tens. The pair held and Gamez was out.

The overnight chip leader Madis Muur exited in fourth and it was Panka taking his chips AK>QTo; and we were heads-up when Panka eliminated Isaac Baron in third place to take a slight chip lead into heads-up. It was KQo for Baron versus A9ss of Panka and the Pole duly flopped the nuts.

The turning point in the heads-up match came when Panka made his move with a four-bet jam holding pocket nines, and McDonald called with just KJo.

“That’s crazy,” said Ike Haxton who was doing the commentary for EPT Live.

Panka’s hand held and he would maintain momentum past the finishing line after his A2o beat McDonald’s 74cc as the Canadian was reduced to a shove or shove strategy.

Jake Schindler has dwarfed his lifetime earnings by taking the top spot in the $25k PCA High Roller for $1,192,624 after defeating the former World Series of Poker (WSOP) Main Event champion Greg Merson in heads-up action.

Take your hat off to Schindler who had to navigate his way through a final table that was as tough as my wife’s Christmas cake: Ole Schemion, Marvin Rettenmaier, Robert Mizrachi, Mustapha Kanit and last years winner Vanessa Selbst forming an all-star cast.

All eyes were on Selbst as she attempted to become the first back-to-back $25k champion, but just like Timex in the $10m Guaranteed, it would be a case of so close but not to be chewing on a Cuban.

Selbst finishing in third place, but another massive six figure score will be more than welcomed by her bank manager.

There were a few players who decided that the Bahamas was a little too warm for their liking, and instead plumped for a good old time in the East Midlands over in good old Blighty.

Well that or they were just too skint to afford the flights and accommodation.

935 players showed that British grass roots poker is alive and well, making the Genting Poker Series (GPS) in Nottingham the most popular in the tour’s history.

The victory (on paper) was Michael Richardson who deserves a hat tip for coming through a final table that included the likes of JP Kelly and Simon Deadman.

Kelly would leave in ninth place after running AK into the AA of Deadman, and the former World Poker Tour (WPT) National Series Dublin winner would make it all the way to heads-up action before falling to the eventual winner.

I use the words ‘on paper’ because when the action got down to a triumvirate a deal was struck that saw Deadman walk away with the lion share of the cash, despite Richardson eventually picking up the trophy.

EPT Deauville Round Up: Victories for Greece and Poland
Lee Davy
3 February 2014
.