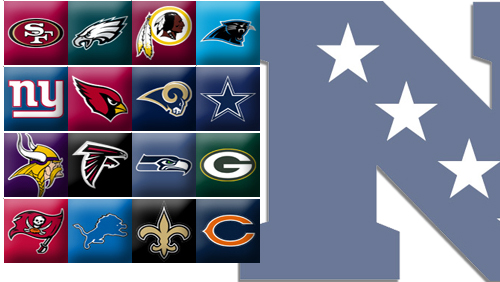 Following up on yesterday’s AFC Divisional Round preview, the NFC gets its turn today. On tap for the weekend are a pair of games what will determine who meets who in the NFC title game.

At the end of the week, it’s either going to be the New Orleans Saints or the Seattle Seahawks taking on the San Franciso 49ers or the Carolina Panthers. The battle lines are drawn so as early as today, we’re taking a look at both games and try to develop a sound betting strategy for both games.

Talking about revisiting recent history, the divisional round game between the New Orleans Saints and the Seattle Seahawks sounds like an easy bet for the favored home team. After all, it’s been a little over a month since the Seahawks throttled the Saints on Monday night of Week 13, coasting to an easy 34-7 shellacking of New Orleans at CenturyLink Field. The Saints were never really in that game, and if you’re going to use that game as a basis for your bet, then the Seahawks’ -7.5-point spread suggests a gift pick from the gambling gods.

Then again, the stakes are definitely higher now and expecting another stinker from Drew Brees & Co. doesn’t sound too likely.

A lot of the public money has gone Seattle’s way with the 7.5 line was bet all the way up to as high as 9 points before settling in at 8.5 points. With the way the public has jumped all over the Seahawks bandwagon, it could be a smart ploy to let the line reach as high as 10 (it’s within the realm of possibility) before pounding on the road dogs to make it a closer game than that fateful shellacking in Week 13.

It’s within play given the stakes involved and with one side seemingly having an overflowing bandwagon on it, opting for the one with more space may lead to a more comfortable ride to cashing in.

The most intriguing match up of the divisional round is also the same one that has had some pretty perplexing line movement. When it first opened, the 49ers and the Panthers game was labeled a “pick ’em”. But in the first 24 hours or so, the line jumped up to -2.5 for the…49ers.

Yup, the road team who just came off a dramatic win in Green Bay but who lost to the well-rested home team on a bye is the favorite in what promises to be a clash of two of the league’s stoutest defenses. That’s the kind of respect being given to a 49ers team that everybody seems to high on to not only beat Carolina, but win the SuperBowl in New Jersey.

There’s no going around it; sportsbooks either believe that the 49ers are better than their record says, or they’re massively sleeping on a Carolina team that has not lost at home since Week 1 to the Seahawks. And that game 12-7.

Carolina’s home dog status could be an appealing bet, especially if the public keeps driving up San Francisco’s line. We doubt that it’ll go past 3.5, but if it hits -3 for San Fran, then Carolina deserves a seriously long look.