Home / Casino / Nevada casino revenue up 11.9% in November thanks to baccarat and football 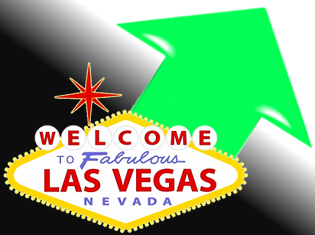 Nevada casino gaming revenue rose 11.9% to $876m in November, thanks to a surge in baccarat winnings and another record month at the state’s sportsbooks. The takings were even better on the Las Vegas Strip, which saw revenue rise 22.6% to $529m. The revenue bounty was a welcome change from October, which saw revenue slip 2.5% year-on-year. But November’s surge must be taken in context, given that November 2012’s revenue tally was 11% less than November 2011’s $880m, meaning November 2013 is more like a restoration of the status quo. For the fiscal year to date – the five months since July 1 – Nevada casino gaming revenue is up 3.3% to $4.67b.

Slot machines continued their losing ways, posting a 6.8% decline in winnings to $497.6m despite a minor uptick in slots handle. Nevada casino poker rooms brought in $10m in November, up 8.5% year-on-year. As always, the Nevada Gaming Control Board declined to break out the revenues earned from the state’s two active online poker sites, based on its policy of not delineating the online take until at least three sites are operational. Or, in other words, never, considering that no company has given any public indication that it is planning an imminent launch in Nevada’s already stagnant online poker market.

Nevada’s sports- and racebooks posted winnings of $30.6m in November, a whopping 474% year-on-year improvement and a new monthly record for amount wagered at $490.3m. Football accounted for the bulk of this wagering at $356m, the third consecutive month in which a new football handle record was set. A 6.84% hold rate resulted in a 560% gain in football winnings to $24.3m, although the percentages got a wind-assist from the fact that the books lost $5.2m on football in November 2012. Parlay card winnings were also up significantly, rising 533% to $5.4m, while basketball winnings rose a comparatively minor 110% to $3.3m.