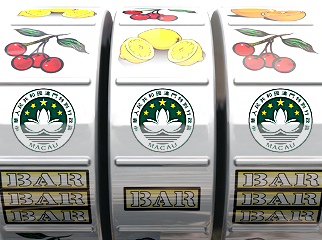 Slots are something of an afterthought in Macau, where baccarat rules supreme. Slots accounted for just 4.1% of Macau casino gambling revenue through the first nine months of 2013, but Macau is a pretty big pie, so even slots’ thin slice is worth MOP 10.6b ($1.3b). What’s more, slots’ Q3 revenue was up 13% over last year, despite the fact that the overall number of slots in use in Macau has fallen 10% this year. (The decline is not from lack of demand but due to necessary coding alterations to comply with last November’s slots law rewrite.)

Slots’ share of Macau’s revenue pie will likely keep growing given the number of machines expected to hit casino floors over the next few years. Macau Polytechnic Institute associate professor Zeng Zhonglu believes the flashy new casinos being built on Cotai would likely add 10k machines to the 15k currently in operation. Zeng told attendees at the recent Macao Gaming Summit that this increase, coupled with the existing machine attrition rate, means Macau can expect to add an average of 5,700 new machines in each of the coming four years.

Zeng told Macau Business Daily that mainland tourists are increasingly warming to slots as they become more accustomed to visiting Macau’s legal gaming joints. No longer laser-focused on immediately making a big score at baccarat, players are placing more emphasis on maximizing gambling’s entertainment value. Zeng also believes the new slots regulations will help improve the machines’ image in the minds of Macau’s gamblers. Slots are now required to pay out between 80% and 98% of handle, whereas Zeng suggested some of the older machines had been paying out as little as 70%.

Another aspect of that rewritten slots regulation involved closing five slot machine parlors located in residential areas, part of a plan to reduce Macau citizens’ accessibility to gaming. Melco Crown Entertainment closed two of its Mocha Clubs parlors and relocated a third, while SJM Holdings closed two more before the Nov. 26 deadline. But SJM has launched a free shuttle bus service collecting players at the now closed Yat Yuen Canidrome Slot Lounge between 8am and midnight and ferrying them to the welcoming slots at the Grand Lisboa. Further proof that when gambling regulators close a door, gambling gods open a window.