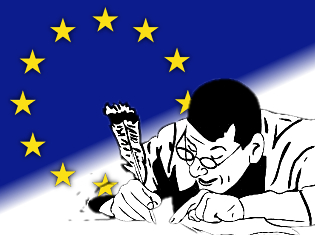 The European Commission has written a strongly worded letter to a number of countries warning them to improve their gambling regulations or the EC will write them another strongly worded letter. Last October, the EC put countries on notice with the release of its online gambling Action Plan and the EC has now called on a number of specific states to ensure their regulatory frameworks for gambling were compliant with the fundamental freedoms espoused by the European Union. However, the countries left off the EC’s naughty list were perhaps more newsworthy than the ones called out for public shaming.

On Wedneday, the EC “requested” Sweden find a way to ensure that its gambling monopoly respected EU internal market rules on the free movement of services. The EU said Sweden’s restrictive policy toward online betting and poker “is not applied in a systematic and consistent manner and that the holder of the exclusive right is not subject to strict state control.” The EC undermines its own authority somewhat by noting that it had said something very similar back in 2007, yet here we are. Sweden has now been given two months to remedy the situation or the EC will call in the EU Court of Justice (CJEU). That is, unless Sweden responds with its own letter pointing out that the EC forgot to say ‘Bureaucracy Says’, at which point the EC will have to start over from scratch. Tough, but rules are rules.

The EC said it had questions about Belgium’s decision to award a betting license by Royal Decree to the Lotterie Nationale, a move that Stanleybet and two other legitimate Belgian license holders officially protested last October. The EC also has questions for Cyprus as to whether it was providing equal treatment for operators, something Betfair officially complained about last September. The EC also sent “official requests for information” to the Czech Republic, Lithuania, Poland and Rumania regarding their respective legislative intentions to restrict certain gambling services.

Lest it be seen as total ogres, the EC announced it had closed an infringement case against Finland after deeming that the amended Finnish Lotteries Act that took effect in January 2012 had taken the necessary steps – mainly, not exhorting Finns to gamble – to justify its state monopoly.

But notably absent from the EC’s release are Germany and Greece, countries which have been cited in more than one pan-European online gambling operator’s dismal earnings reports over the past couple years. The Remote Gambling Association (RGA) described the absence of the dastardly duo as “particularly regrettable” and wondered why no countries have so far been sent to the CJEU “when existing infringement proceedings appeared to be sufficiently advanced and substantiated to do that.” No doubt these complaints will prompt the EC to compose a fresh response, which the RGA can likely expect mid-2016.