Home / Poker / Faraz Jaka: How to Avoid Nightclub Lines With Own The Night 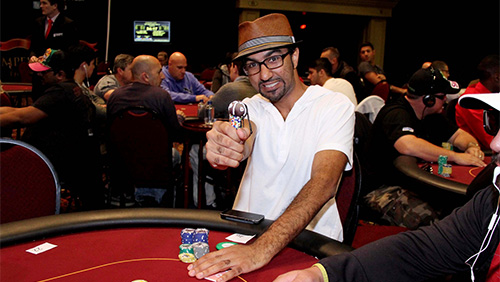 The visiting poker clientele decided to get local by dressing up in a wide range of African garb during the shenanigans of the World Poker Tour (WPT) stop in Johannesburg, but nobody looked more at home than Faraz Jaka. Not only was he wearing the appropriate attire, but he also had a little voodoo doll as a card protector to place bad beats on people.

If I was Jaka I would ask for my money back, as the doll decided to inflict a bad beat on its owner when he flopped two pair, and looked likely to double up just a few places shy of the money, before a runner-runner combo gave his opponent the winning hand and knocked him out empty handed.

At least it gave me the opportunity to talk to the entrepreneurial poker player. The last time I spoke to him he had invested in an app called Own The Night, and I was keen to learn how his beta testing had been going.

“Imagine you go to a club and there are huge lines just to get in. Usually, only people who are familiar with the bouncers obtain entry first, but there are big spenders at the back of the cues who miss out. These are the clubs valuable customers, so how do we get them into the club first?

“They sign up for our app and put their credit card on file and we have the technology that can measure there bar bills at any club around the world over the past six months. This allows us to give them a VIP rating: Gold, Silver or Platinum. For example, if they are Platinum they can skip the lines, skip cover and things like that. We are basically giving the clubs a way to identify their best customers, and in return we receive a cut of the customers bar spend.

“We launched in Chicago a few months ago and eight clubs have already signed up. We are going to launch in San Francisco next, then after some more beta testing we will take stock and see if the thing is a success before trying to raise some real capital.”

A high percentage of the poker playing community is entrepreneurial and I wondered if Jaka had ever considered setting up a gambling company?

“It’s crossed my mind but I prefer my investments to differ from my profession. For example, if I worked for Sysco and also owned stock in Sysco and something bad happened to the company you may lose your job and your investments. So that’s why I prefer to diversify.”

If you live in the Chicago or San Francisco area then keep your eye out for Own The Night, if that fails just tag along with Phil Hellmuth who has never seen the back of a nightclub cue in his life.