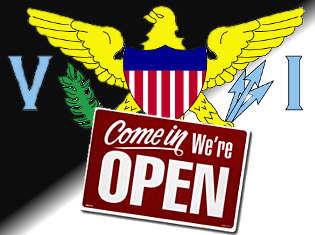 The US Virgin Islands (USVI) wants to accept online gambling wagers from customers in any jurisdiction in which such activity is legal. Within hours of the American unincorporated territory declaring itself ‘open for business’ and inviting online gambling companies to set up shop on its Caribbean shores, acting chairwoman of the Casino Control Commission Violet Ann Golden claimed to be in discussion with other US states – including New Jersey – about allowing their players access to the USVI’s games. At the same time, the top exec of the tech firm tasked with hosting the online play says the USVI should take a broader view and accept punters from across the globe.

The USVI passed the Virgin Islands Internet Gaming and Internet Gambling Act back in 2001, around the same time that Nevada passed its first online gambling bill, And just like Nevada, the USVI never implemented its plan after receiving a strongly worded letter from the US Department of Justice in 2004 stating in no uncertain terms that internet gambling was illegal under federal law. Fast forward to late 2011 and the DOJ flip-flops on the Wire Act’s scope, prompting the USVI to blow the dust off its gambling legislation and here we are.

But while USVI Attorney General Vincent Frazer gave Gov. John de Jongh an opinion saying the absence of sports wagers in the 2001 legislation meant the Act was legal “on its face,” Frazer expressed “concern” about the Act’s interstate component. Frazer warned the government that “caution should be the rule because the pitfalls are in the implementation of the law.”

This uncertainty has St. Thomas businessman Nick Pourzal feeling déjà vu all over again. Pourzal is the principal behind USVI Host, one of the two ‘master service providers’ the USVI legislation authorizes to act as web hosts for USVI-licensed online gambling companies. The original draft envisioned USVI Host as sole provider but this was amended to include St. Croix Internet Group LLC.

The two firms were approved for 10-year licenses with two 10-year renewable terms, but the legal uncertainty created by the DOJ’s anti-online stance dissuaded the St. Croix firm from ever applying for its license. Pourzal and his USVI Host partners – Tom Colameco and Robert Schick – had lobbied hard for the legislation’s passage and were therefore a little more determined to follow through. USVI Host received its master service provider license in September 2003 and is currently in the process of renewing, although Pourzal told the Virgin Islands Daily News that his frustrated investors have long since taken their balls and gone home.

Some USVI politicians have expressed reservations about giving any exclusivity rights to either of the original MSPs. Sen. Nereida Rivera-O’Reilly believes the two firms were too cozy with government when the Act was passed and has proposed amending the Act to allow any technically qualified company to apply. However, Gov. de Jongh vetoed a similar measure just last month, so broke or not, USVI Host’s position appears secure. Whether the USVI’s online gambling invitation will attract any operators for Pourzal to host is a far less certain proposition.