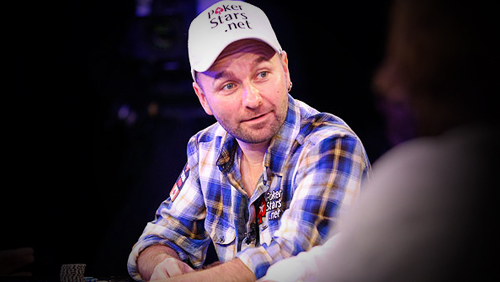 Daniel Negreanu must love coming to Europe to play big time poker. His record in the WSOPE major events is second to none, and he has capped off another wonderful series by packing more silverware into his suitcase.

When Negreanu arrived in Paris his only thought on his mind was to knuckle down and catch Matt Ashton who was perched at the top of the WSOP POY leader board.

Negreanu captured the inaugural event when it was created back in 2004, and he has once again re-written the record books after becoming the first player to win two WSOP POY awards, with victory in the €25.6k High Roller.

It was an amazing achievement as Negreanu defeated 79 of the world’s best players en route to this stunning victory, proving once again that he deserves his place amongst the games elite.

This is how the day unfolded.

Level 18: McLaughlin Runs Out of Steam to Bubble

Tom Bedell was the first player eliminated when he got his short stack – and QT – into the middle against Scott Seiver and AK. The flop produced a ten to give Bedell hope, but the turn handed Seiver a starring role on Broadway and he took all the plaudits.

Phil Laak bust Erik Seidel when his pocket sixes out lasted king-queen in a race that went the way of Laak; Nicolas Villa-Lobos eliminated Byron Kaverman KQ v A6 when two kings turned up on the flop and turn, and Timothy Adams doubled on the bubble when his AK got through the AJ of Scott Seiver.

That double up produced frowns on the foreheads of both Marc McLaughlin and Joni Jouhkimainen who were playing with fumes. Then the action stumbled onto McLaughlin – who knew he would be blinded out before the Fin – and he called a small blind shove from Timothy Adams.

It was [Js] [4c] for McLaughlin and [8c] [6s] for Adams; a six on the flop sending the November Nine home and we were down to our final nine players.

Daniel Negreanu made history when in 2004 he became the first winner of the WSOP POY, and after the elimination of Joni Jouhkimainen he re-wrote those record books by becoming the first-ever player to win two WSOP POY titles, by snatching victory away from the clutches of Matt Ashton.

Jouhkimainen getting his teeny-weeny stack into the middle with [Kh] [5h] against the ace-jack of Philipp Gruissem, and an ace on the flop sent Jouhkimainen sideways to the rail and Negreanu vertical with a triumphant leap into the air.

Shortly after there was more good news as Negreanu doubled through Erik Seidel after his [Ac] [Jc] flopped the nut flush when all-in, and at risk, against the New Yorkers KJ.

The Negreanu double up didn’t eliminate Seidel, but it did make his next few decisions relatively easy. Seidel getting it in with AJ against the A7 of Scott Seiver in a hand that looked like a sure fire double up for Seidel, until the deck produced trip sevens for Seiver and Seidel was out 8th place finisher.

The official final table of six was set after the elimination of Jason Koon. It was ace-king for Koon, and he was just unfortunate to run into David Peters and pocket aces. Koon took €62,500 for his troubles and Philipp Gruissem started the final table with the chip lead.

Scott Seiver would finish the tournament in sixth place after a squabble with Daniel Negreanu. It was ace-jack for Seiver; king-queen of diamonds for Negreanu and a queen on the river settled the outcome – €74,600 was the consolation prize handed out to Seiver.

Timothy Adams is fast becoming one of the greatest components of this High Roller format. The only thing he is missing is a victory, but that apart he is making some decent money, and this tournament was no exception.

Adams pushing his short stack into the middle with Q8 and Daniel Negreanu finding the odds to make the call in the big blind with [9h] [5h]. It was messy, it looked awful, but when the nine on the river arrived, Negreanu took it and Adams was eliminated.

David Peters was the next player to hit the road and it was Nicolau Villa-Lobos who packed his bags. As you would expect, so late in the contest, it was a pre flop all-in and call with Peters ahead: TT v AQ until a queen hit the flop to reverse the fortunes.

The bank of the German High Rollers got a little fatter with the addition of €250,000 courtesy of a third place finish from Gruissem. Although he will be disappointed not to tie this up – particularly having the chip lead for so long – he will look at it as a positive.

When the end came it was Daniel Negreanu who would take the chips into the heads-up phase after his AJ dominated the A4cc of Gruissem to take the Canadian into the heads-up action against Nicolau Villa-Lobos with a 4m to 1.99m-chip lead.

It has been a very rapid ascent in the game of poker for the Brazilian Nicolau Villa-Lobos.

He took second for $43,306 in the Brazilian Series of Poker (BSOP) back in March 2012 before later that year cashing for $88k in the WSOP Main Event. He took that roll and captured the UKIPT event in Edinburgh in Jan of this year before securing deep runs in EPT Barcelona and London before flicking in the €25k to hang around with the big boys.

€450,000 is what you call a ‘right result’, and although missing out on the win might hurt, Villa-Lobos leaves Paris a big winner.

He limped into the pot before jamming over a Negreanu raise holding pocket fives. Negreanu called with jacks and five cards later he was being handed his sixth WSOP gold bracelet and €725,000 in prize money.