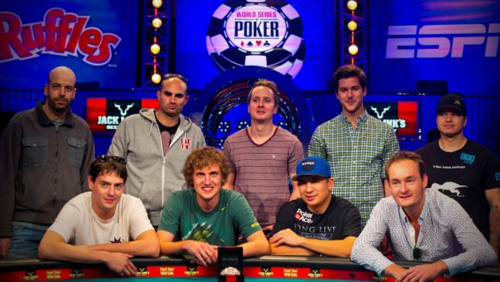 WSOP Europe is now running, and that means we’re just a few weeks away from the final table of this year’s WSOP Main Event. The November Nine have had three months off from the biggest tournament in the world – but what have they done with that time? Here’s a quick look.

Tran has just one cash since the Main Event final table went on hiatus, but it was a big one. He took second place in the first-ever WPT Alpha 8 tournament, a $100,000 buy-in no-limit hold’em tournament at the Seminole Hard Rock Poker Open in Florida in late August. He faced off against an elite field of 21 players and made it past all of them save eventual champion Steven Silverman, walking away with $526,890. He’s also playing at WSOP Europe, which has been pretty kind to November Niners in the past. Aside from playing poker, Tran has been taking his son fishing and otherwise spending lots of time with his family. Considering that’s what he’d been doing from last summer to this one, his opponents probably would have preferred that he do just about anything else. A calm and grounded J.C. Tran is just about the last man any poker player wants to face off against.

Lehavot, like J.C. Tran, has just a single cash to his name since going on break in Vegas, and it also came in Florida. Lehavot made a deep run in the Seminole Hard Rock Poker Open’s $10 million guaranteed main event, finishing in 16th place for $69,810, his third-largest score of the year. But he probably made his biggest splash when he announced in a 2+2 thread that he wanted to sell up to 30 percent of his action for the November Nine at ICM value, with a minimum investment of $10,000. If he sold the full 30 percent at $29,248 per one percent, that would work out to $877,440 – $144K more than he’s already guaranteed if he finishes ninth in Vegas. He’s promised to publish a list of the final investors and how much they’re in for next week.

McLaughlin has made deep runs in the WSOP Main Event before, finishing 30th in 2009 and 86th in 2011. This year he’s surpassed both those results, and he’s been taking full advantage of the hiatus before the final table to focus his mind on the game. “I’m practicing to get ready for the final table, not really anything else right now,” he told ESPN’s Bernard Lee a few days ago. That’s involved plenty of online sit-and-go tournaments, talking strategy with friends like 2010 Main Event champ Jonathan Duhamel, and playing WSOP Europe. He cashed in Event #2, a €5,000 mixed-max no-limit hold’em event, finishing 16th for €14,905. He sounds pretty dialed in and will be chomping at the bit once November arrives.

Farber is the one true amateur among this year’s November Nine, a Las Vegas VIP host who has never cashed in another major event. Though he has called on a few ex-November Niner friends like Ben Lamb and Jesse Sylvia to talk over their experiences, he hasn’t done too much to change what got him to the Main Event final table. “You can only drill and watch videos and run simulations so much until you get bored,” he told Bluff Magazine’s Howard Swains a few days ago. He’s traveled to play poker tournaments during the hiatus, including WSOP Europe, but hasn’t managed another cash yet. Regardless, the one on his resume is the right one – and that’s more than enough for Farber wherever he finishes.

Riess, the youngest player among the November Nine, has been enjoying himself during the hiatus. He played WPT main events at the Bicycle Casino in L.A. and the Borgata in Atlantic City, where he cashed in 68th place for $8,828. He’s also been taking in lots of live sporting events, including a Dodgers-Padres matchup, a Detroit Tigers game, and a Detroit Lions NFL game in Washington in September. His easygoing attitude shouldn’t be mistaken for not caring, though. “The title is everything. I would not be happy with second place,” he told PokerNews back in August, before predicting a win.

Loosli isn’t the first player from France to make the final table of the Main Event – that honor belongs to Antoine Saout (2009) – but that’s made him no less a celebrity in his home country. He signed a sponsorship deal with regulated French online poker site Winamax, making him instantly famous. Then he shared the stage with French pop star (and WSOP bracelet winner) Patrick Bruel on the Canal+ talk show Le Grand Journal. When he hasn’t been playing the part of French celebrity, Loosli has managed to squeeze in a bit of poker, too: he earned a second-place prize of €60,000 in a €550 six-max no-limit hold’em event at the Winamax Poker Open in Dublin.

Brummelhuis became the first player from the Netherlands to reach the WSOP Main Event final table, topping Marcel Luske’s 10th-place finish in 2004, and has become something of a celebrity in his home country. He signed an endorsement deal with 888 and was named the ambassador for the 2013 Master Classics of Poker, the latest installment of Holland’s longest-running poker tournament series. He also became a father for the first time, which he describes as “supercool.” With all those activities he hasn’t been playing much live poker, but he did manage to take fifth place for €8,863 in a €1,000 no-limit hold’em event at the Breda Series of Poker in Holland earlier this week, an experience he described as “good preparation” for WSOP Europe and his return to Vegas next month.

Newhouse has traveled a lot during the hiatus, spending two months criss-crossing Europe and hitting up Morocco and the Ukraine along the way. The trip seems to have done him well since he has two cashes in the last two weeks. He took 54th place at the EPT £5,000 London main event for £11,425, and then he narrowly missed making the final table of Event #2 at WSOP Europe, finishing in 12th for €14,905. Together with his seat at the November Nine that gave him three cashes total for the year, tied for the most of any year in his career; the first time he cashed in three live tournaments in a single year, he won the Borgata Poker Open. Combined with an endorsement deal with Commerce Casino in L.A., it’s been a pretty good break for Newhouse.

Benefield might describe himself as an “ex-pro-poker player,” but he’s been the most successful of the November Nine at the tables since the hiatus. He cashed in the Seminole Hard Rock Poker Open’s main event, finishing 173rd of 2,384 runners. Then he traveled to Spain for EPT Barcelona, where he cashed three times: 110th in the main event, eighth in the €10,000 High Roller re-entry event, and fifth in the €48,000 Super High Roller event. Just two weeks ago he added another cash with a seventh-place finish at EPT London’s Super High Roller event. All told, Benefield has $595,613 in winnings while waiting to return to his short stack in Vegas – pretty good for a guy who left poker to focus on investing and studying Chinese and political science.