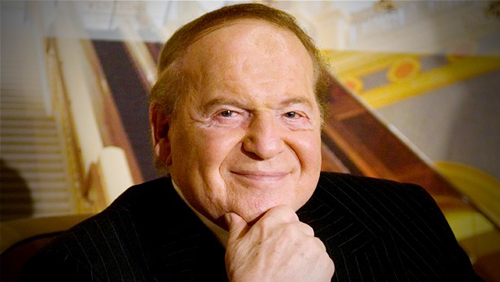 You didn’t think he was done, did you? Las Vegas Sands chairman and CEO Sheldon Adelson made waves this summer with a series of invectives on television and in print warning of the ills of legalized online gambling in the United States. Adelson – whose opposition to iGaming is long-held – used a series of sometimes-unwieldy metaphors to describe Internet gaming, most notably calling it “a cancer waiting to happen” and “a toxin which all good people ought to resist.”

While our own Steven Stradbrooke – among many others – have questioned the accuracy of many of Adelson’s criticisms, it also seems likely that Adelson’s outsized political influence means his opinion matters, whether it ought to or not. This is man who spent at least $98 million – and possibly as much as $155 million – on elections across various levels in 2012, according to nonprofit newsroom ProPublica. And so it was unsurprising when Adelson’s opposition again made the news on Wednesday, as veteran Nevada journalist Jon Ralston obtained a memorandum outlining a series of polls commissioned by Adelson regarding public feelings toward Internet gambling and poker in four likely key states: California, Kentucky, Virginia, and Pennsylvania.

Perhaps unsurprisingly, the results seemed to back Adelson’s position; Ralston himself posted on his blog that he found the results “quite startling.” What was most notable was the divide between sentiment toward land-based gambling and its online counterpart. Indeed, the overall feeling toward gambling “as a way to generate revenue for the state” was strongly positive. 66 percent approved in Pennsylvania, and 57 percent in California; more surprisingly, 61 percent of likely voters in Kentucky and 54 percent in Virginia approved of legalized gaming. The latter two, of course, are both states without legalized casinos, though Kentucky has repeatedly come close. Respondents in Pennsylvania and – very narrowly – California both supported expansion of gambling to deal with deficit issues. (This despite the fact that Pennsylvania’s land-based industry may have already reached a saturation point. Indeed, the state’s newest casino, operated by Isle of Capri in Farmington in the southwestern portion of the state announced layoffs of 15 percent of its staff less than two months after opening, according to  KDKA-TV in Pittsburgh.) And only in Virginia did respondents have an overall negative view of “Las Vegas style gaming.”

However, as pollster Dave Sackett pointed out, “voters in all four states have a universally different (and far more negative) view of internet gambling and internet poker.” In fact, across all four states, fully three times as many respondents viewed iGaming negatively as did positively, with the average margin being 66-22 toward the negative side. The responses changed slightly when a so-called “competing thematic” was added, in which pollsters were told that “some people” say Internet gambling is “very different” from existing products, while “other people” argued it was “no different,” but rather “a natural extension of gambling options in this technological age.” Overall, “very different” was chosen by a nearly 2-to-1 margin; the gap was greatest in Pennsylvania, one of the few states where an iGaming bill has been at least theoretically discussed. Additionally, strong majorities in both Kentucky and Virginia favored the current ban on iGaming (by margins of 63-27 and 55-33, respectively).

Sackett summed up his anti-iGaming findings by pointing out that over 60 percent of voters in the four states were opposed to “any proposal to legalize internet gambling or internet poker.” Kentucky had the smallest margin – with 35 percent in favor and 58 percent opposed – but the margin was again worse than 2-to-1 in the remaining three states. “Even among those voters in each of the four states that self-identify as ‘active gamblers’,” Sackett added, “a solid majority” remains opposed to iGaming.

So is the poll a sign that iGaming initiatives beyond the three existing states are doomed? After all, Pennsylvania’s recent casino expansion – and 12 million residents – would seem to make it a prime candidate for online gambling legalization, while California’s efforts have, supposedly, been stymied less by public opposition to iGaming websites than by pissing matches over who is allowed to operate those sites. Neither Kentucky nor Virginia has been touted as a near-term possibility for state-by-state legalization efforts, but the strong opposition to iGaming in those states would seem likely to be shared in neighboring southern states, which have a long-standing bent toward social conservatism and against gambling in general. In effect, those results could conceivably rule out online gambling in an entire region of the US for the foreseeable future.

But it’s not entirely clear that the poll is the final word on iGaming sentiment in the country. The four-page memo did not list the exact questions asked; in response to a question via Twitter, Ralston replied that he was trying to get that information. But even in the limited information available in the released memo, the language between the land-based and iGaming-related questions is somewhat different. Most notably, the questions relating to land-based gaming appeared to refer to gambling operations’ ability to generate revenue for the state, an attribute that does not appear, at least from the memo, to have been mentioned in the questions regarding iGaming. It seems highly likely that a small subset of voters could support the legalization of online gambling even if they personally disfavor the practice. Indeed, that was exactly the case regarding land-based casinos: only 53 percent of respondents viewed “Las Vegas-style” casinos favorably, yet 60 percent supported allowing those facilities to generate revenue for the states. If some voters will trade what they consider the moral or ethical sin of land-based gambling for additional tax monies in the state coffers, won’t at least a few consider the same trade-off for iGaming?

There are some more issues. As one Twitter reply to Ralston pointed out, the study did not differentiate between Internet gambling and Internet poker; it certainly seems possible, if not likely, that a “poker-only” regime (as seen currently in Nevada) would garner more support than a full suite of banked games including blackjack, baccarat, and the like. And poker advocate Marco Valerio pointed out that in 2011, 67 percent of New Jersey residents opposed Internet gambling. Indeed, the article cited by Valerio pointed out that even after governor Chris Christie signed New Jersey’s online gambling bill, a poll showed that 46 percent of New Jerseyans still opposed the bill, with only 41 percent in favor.

And, at the risk of being snide, it’s also worth pointing out that the polling firm commissioned by Adelson, the Tarrance Group, is according to its own website a “Republican strategic and polling firm.” One week before the 2012 election, that firm predicted a 52-47 victory for Mitt Romney, adding in a memo published by race42016.com that “Romney may well be heading to a decisive victory.” (There’s likely little confusion as to why Adelson chose this particular firm to do his bidding.)

Still, the data from the poll should be worrisome for iGaming advocates, given the largely unfavorable attitudes toward online gambling in the four states. At the same time, it should hardly shock or even surprise anyone remotely familiar with the gambling industry and US politics. As I wrote in June, in the wake of Adelson’s summer outbursts, the attitude he expresses may be condescending and overprotective, but it’s also widely held and difficult to overcome. With state-by-state legalization seeming more and more to be the industry’s future path, iGaming proponents need to establish coherent, effective, and organized strategies for touting the benefits of their products and addressing the fears of voters and politicians about its potentially damaging effects.

To be clear, that sort of push does not include trying to pass federal legislation by convincing the American public that unregulated online gambling leads to good-looking young white men getting eaten by crocodiles. iGaming advocates should be asking themselves serious questions when reviewing this data. For instance, why do over two-thirds of voters in Pennsylvania, a state with far and away the largest tax revenue from gambling in the country, hold a knee-jerk opinion against online gambling? There must be a coherent message about the industry’s intent to – and ability to – prevent underage gambling, institute effective betting limits, and assuage fears regarding the possibly greater societal impact of mobile applications. The online gambling industry is arguing that its products will give customers what they want, expand entertainment options to US residents, create jobs, prevent unregulated operators, and boost tax revenues. They are arguing that iGaming is a good thing. Unfortunately, right now, not enough people believe them – and the industry needs to begin to figure out why.