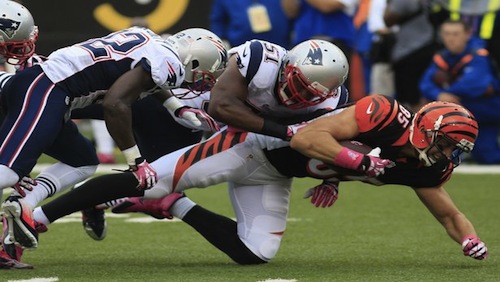 The Cincinnati Bengals, fresh off of getting waxed by the Cleveland Browns a week ago, repaid the favor to all of its backers with a thoroughly impressive wire-to-wire win against the public favorite New England Patriots. Tom Brady was battered early and often, and the Bengals, who got steamrolled by the now garaged Brian Hoyer Express just last week, added another elite “No. 12” quarterback to their list of victims this year. In so doing, all the public money bon the Patriots quickly went up in flames, giving sportsbooks an easy win on what everybody thought would be one of the most competitive games of the year.

In somewhat unfamiliar territory, one of the most publicly-backed teams in the NFL, the Dallas Cowboys, didn’t have the kind of public betting support it was accustomed to. Of course, facing the Denver Broncos sometimes does that to a team. Heading into the game, the Broncos, another public team for what its worth, closed as 7.5-point favorites on the road against the Cowboys. With public money riding on the shoulders of Manning and the Broncos, it became apparent pretty early that those who trusted Romo and the ‘Boys as live home underdogs would be rewarded in kind. Denver did come back from behind to win on a Matt Prater field goal as time expired, but the 51-48 result meant that Denver final has that “L” on its ATS record, much to the chagrin of the public and to the delight of the books.

The rejuvenated San Diego Chargers also saw a lot of money on its side against the Oakland Raiders in a game that started so late people in the East Coast probably didn’t even make it past halftime before finally going to bed. Unfortunately, for the public, the Oakland Raiders played a hell of a game in its own right. With San Diego closing as 4.5-point road favorites against the Raiders, sportsbooks scored another great result after Terrell Pryor and the Raiders closed out an impressive straight-up win that really wasn’t as close as the 27-17 final score suggested.

Overall, it was a pretty good week for sportsbooks, although one notable loss came at the expense of the New Orleans Saints, who emphatically served notice to the league that they’re one of the best teams in the NFL, beating the home dog Chicago Bears at Soldier Field, 26-18 despite closing as only 1-point favorites against Chicago.

Looking ahead to Week 6, one game figures to get a whole lot attention from bettors and even the mainstream media. The aforementioned Denver Broncos will take its 5-0 record back to Mile High city where it will host the decrepit Jacksonville Jaguars in a game that opened on a lot of sportsbooks as having the largest point spread in NFL history.

That’s how much the Broncos are favored against the Jags. Four touchdowns. That line is either a testament to the Broncos’ ability to rack up scores like nobody’s business or the Jaguars’ mind-blowing ability to continuously redefine the word ‘helpless’. Either way, expect that number to swing on either side in the weeks leading up to the game, but don’t expect it to go down to anything lower than 24 points, which is still a seemingly ridiculous line between two actual NFL teams.

Then again, questions abound on how ‘legitimate’ of a team the Jaguars really are.

NFL Wildcard Weekend: What You Need To Know About Each Matchup
Nick Gianatis
7 January 2016