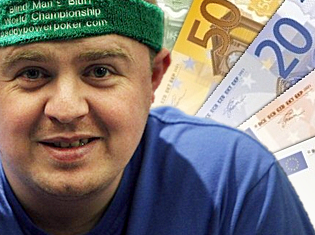 Irish poker player Paul Carr (pictured) has lost his legal quest to reclaim €36k in poker winnings seized by local law enforcement a couple years ago. In May 2011, police in Limerick raided the home of a Carr friend they suspected of being a drug dealer. The cops found no drugs, but did find the €36k in question, which they confiscated as the alleged proceeds of criminal activity. Carr claimed he’d simply asked his friend to hold on to the cash, which was part of the €312k Carr had earned for his runner-up finish at the 2010 Paddy Power Irish Open.

In making the plea for the return of Carr’s cash, attorney Michael Collins argued that having “friends in low places” was insufficient to justify the seizure. On Friday, the Limerick Circuit Court disagreed, as Judge Tom O’Donnell said he was “satisfied on the balance of probabilities” that the cash was derived from criminal activity. O’Donnell declined to issue an order for court costs, but allowed for €4k of the disputed cash to be allocated for Carr’s legal team to use in the event of an appeal.

Regardless of whether such an appeal is launched, Carr’s money woes are far from over, as prosecutor John O’Sullivan told the judge he may apply to forfeit to the state a far greater chunk o’ change police seized in August 2011. In that case, police stopped a car driven by a Carr friend, leading to the discovery of €244k in a plastic bag. Carr’s lawyer said that “adding it all up, that’s about the account of my client’s winnings,” but whether mathematics will prove more convincing than prejudice remains to be seen.