Home / Poker / A Female Perspective on Poker: The Grindettes If you want to gain a deeper understanding of a female perspective on poker, and in particular online gambling, then look no further than The Grindettes. Professional poker player Katie Stone (KS) founded the group in 2011, after she felt women were being under represented in poker, and wanted to provide inspiration and courage for other women who may be put off by the male dominated environment. 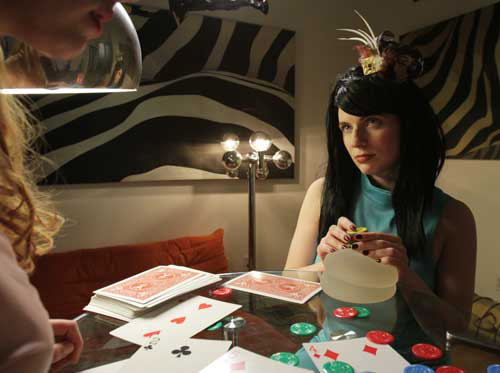 The other members of the group include Jamie Kerstetter (JK), Jennifer Shahade (JS) and Katie Dozier (KD) and here is what they had to say about the female perspective on poker.

When you have to wear make up or behave in any way that may fall into the category of hyper sexualisation. Do you think you have a choice, or do you believe this is just the way it has become for women in order to survive?

KD – I don’t think that I ever have to wear makeup when I play live. As I generally grind online in my PJs, and without makeup, I enjoy dressing up on the occasions that I work outside of my home. Furthermore, I like capitalizing on my image. If I were to always wear in a hoodie with the patches of the training sites I make videos for, then it would peg me as a reg, instead of setting up the potential for others to underestimate me. Naysayers might think that I’m perpetuating a stereotype in doing this, but I think it is actually helping to break the stereotype of what a pro poker player looks like. My online screenname is actually a tongue-in-cheek joke about this. I picked “hotjenny314” in part to make fun of guys that pick a “hot girl” screen name for image, and again to set myself up to be underestimated.

KS – This is one of the things I love about poker; the many different types of people it attracts and their unique, brilliant and quirky personalities that are met without judgment. It is the same in chess; chess players take quirkiness to the extreme. I think this is one of the big reasons I was drawn to poker initially; different personalities and quirks are embraced and I enjoyed that aspect of the chess world, which was my world for the first half of my life. The poker lifestyle is not for everyone, and I think in the back of everyone’s minds we all know we are here for a reason. Some of those reasons probably have something to do with the fact that many poker players don’t ‘fit’ anywhere else in society, or are just uncomfortable in general in conforming to the masses. I feel that I can be myself in this world and that makes me happy.

In terms of the standard male/female stereotypes, a lot of men believe they are superior in a lot of departments, and this belief often stems from social conditioning. Have you ever felt the reverse of that as a woman?

KS – Poker, as does chess, teaches you to think in a logical and objective way. I have never thought nor would I ever think that a man or woman was superior in any mental capability. Men are physically stronger than women, but starting from Point A in any given game or mental activity, men and women start from the same basis I feel.

KD – I think that there’s a tendency for women to be glorified more for their beauty than for their playing ability. If a woman is beautiful and a good poker player, sometimes others will focus on her beauty, which will lead some to think that somehow detracts from her playing ability. Oftentimes, if a man is attractive and also a good poker player, the only person that will call more attention to his sexiness than his playing ability is Norman Chad! I’d really like to see more articles about excellent female poker players, regardless of how attractive they are, and without cliches like– calling them ‘the Queen of Hearts”.

JS – After writing a conflicted chapter in my first book, Chess Bitch: Women in the Ultimate Intellectual Sport about the sexualization of top female chessplayers, I realized that words couldn’t fully express my complicated feelings on all these topics. I love images of beautiful women, enjoy fashion and make-up, etc. Yet I’m also a feminist and don’t believe women should be judged primarily by her looks. Since words failed me I created two related video art projects with my boyfriend Daniel Meirom, who works in film.

The first one – Goldilocks – is about aging. The original fairy tale was about an old woman, but the protagonist got younger as the story aged. The theme was so powerful to me re-imagined as a poker game. Though it can be frustrating to get older in a culture (as well as a specific subculture) that prizes youth so highly, it’s also a privilege to be able to just keep going, all the while playing games. I wrote more about this after last year’s WSOP.

We also created a retelling of Cinderalla (in two parts) as a heads-up poker match for breast implants. In the bloodier, non-Disneyfied Grimm version of the fairy tale, the evil stepsisters mutilated their feet in order to try to fit into the glass slipper and impress the Prince. So this relates to the pressure for women to look hot and specifically have perfect breasts, even if their breasts are already large. To me this also related to the theme of always wanting more. You may dream of going up in stakes or winning a tournament but then when you do, you want to player higher, or win a bigger tournament.

KD – It’s no secret that women poker players are the minority in the poker world, but I think that gap is slowly narrowing, as evidenced by the significant increase in the female percentage in the Main Event this year. How to attract more women to the game is a question that is a constant debate in the poker world.  Personally, I think the key is continuing to make poker a friendlier environment for newcomers, which pros can assist greatly in. PokerStars does a great job of encouraging women with their many ladies tournaments that I enjoy playing in, and their excellent PokerStars Women news section highlights the many different women that love playing on their virtual felt.

KS – I think it definitely deters new women to the game when the only women focused on in poker are 75% naked or are in support roles only. Poker is a game where men and women compete side by side in open, mental competition; the focus should be on the individual’s skill in the game not how they look while playing it.

Focus on the everyday male poker professional is often seen in media features, whereas many of the features on female players are focused on the model-turned-poker-pro types. However, the media as done a much better job over the past two years focusing more on the every day female players in the game and it’s been very refreshing to see.

Do you have any stories of blatant sexism since you have been involved in poker?

KS – There have been many situations I have been involved in that I absolutely feel had I been a man, would have gone much differently. It can be anything from a simple rule questioning or verbal encounter with a man while in a hand. It usually tends to work to my advantage though, because if a man gets pissy when I ask him how much he has back while in a hand with him, I get information about the the type of player he is, and I can utilize it in the way I will play hands against him. I feel as though I have a bigger edge against people like this because they allow their emotions to show through in their style and that is something I can definitely exploit in future hands vs him.