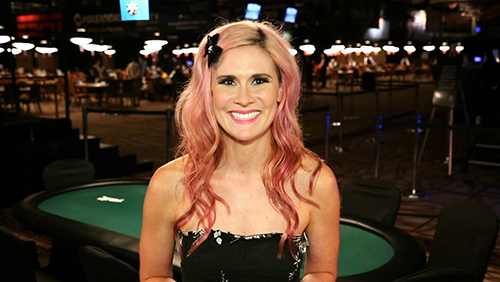 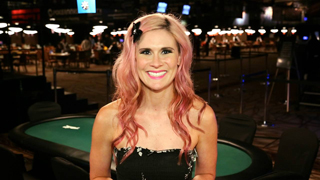 Sarah Michelle Grant is a member of the PokerNews team that traverse the globe bringing you all of the live coverage from the best tours the world has to offer.

When she isn’t working hard as part of the production team, she will be found front and center as one of the hosts, a job that means her face is conveyed to the thousands of fans that tune in to watch the PokerNews coverage.

Sarah is a beautiful woman, always polite and well mannered and a great person to chew the fat with. There isn’t a topic that fades her opinion and she is one of few people who have the confidence to tell it as it is, making her a perfect candidate for a female perspective on poker.

When you have to wear make up or behave in any way that may fall into the category of hyper-sexualization. Do you think you have a choice, or do you believe this is just the way it has become for women in order to survive?

We had an entire episode of Pretty Broad where I was arguing that all woman in this day in age have a new standard that we have to live up to. 10 years ago only stars wore fake eyelashes; now every woman has to in order to compete; 10 years ago hair extensions were only for the rich; now we all have to wear them.

It was funny, in 2012 at the PCA I went out with all these girls and I just felt like an ugly duckling. Finally, they all showed me their lashes, extensions, boob cutlet things and make up tricks. It wasn’t natural, but it was stuff I had never heard of before, but the next thing I knew I looked exactly like them.

I find it both a blessing and a curse. It’s a blessing because you can look smoking hot, and then a curse because it is such a huge waste of time; but these days you really do have to do those things. The guys don’t understand why you look so hot, they just know you do, and that is that.

Yes and no. I am fortunate that my superiors have encouraged me to be the sarcastic and wild one in our team. That gives me a lot of freedom I didn’t realize I had when I first started. Do I think I would be more successful if I played the role of demure cute girl…absolutely.

I imagine there are hosts in the business that are very conscious about their image, and yet I am not, and I don’t care about social media. I don’t care about posting flattering photos and telling people about my health routine. Would I do better if I did…of course, but I think my company has given me a huge blessing to hopefully be successful portraying a certain version of myself. I don’t believe the general public can handle the greyness of everything. They have to pigeonhole us or life gets too complicated.

I have never felt submissive, instead I was always the dominant person in my relationships. Even when I had a girlfriend, while she looked more like a boy, I played the role of the “alpha” person. However, when I got together with Heath, it was the first time I took a more of a feminine role. He could pick me up and throw me around and he became the provider for things such as a roof over our head and putting food on the table. So I started acting more like the woman and I would do his laundry and cook for him. I was shocked at how natural this felt. Instead of feeling like I was fighting, fighting, fighting all the time, I finally felt relaxed.

For sure, but it is my own narcissism that keeps me from doing that. When I play downtown I never look cute, but when I know people are going to be taking photos I always have to put on some make up. Last year, when I went deep in the ladies event I was so tired from a lack of sleep on Day Two, but I still had to wake up early to put on some make up because I knew people would be taking shots of me. That’s my own fault though. I should have slept like a BOSS!

What’s your view of the poker world when it comes to the theory of hyper-sexualization?

The poker world is a mirror for the rest of the world and I am just as guilty of it as any man.

I mean obviously the whole idea of just taking hot woman and trying to make them into poker players is more of a spectacle than a reality; but I also think it gives woman who have not been super sexualized in their lives often a chance to be the hot girl. A lot of the woman who are considered smoking hot in the poker world are probably more like ‘better than average’ in the regular world, and in the film industry – where I used to work – they would be average at best; yet in poker they get to be the babes and I kind of think that’s cool.

The net result of working in front of the camera is people will be looking at you, and in general, people want to be aesthetically pleased. So, naturally if you can do the same job and you happen to be better to look at…you are more likely to get more viewers. Even standard news has headed in that direction lately. And if there are two people who are equally good at it and one is better looking…why not hire the better looking one?

The problem comes when inferior work is born of superior beauty. I would use the music industry as my analogy here. Rock music used to be full of people who were not very attractive, but their talent was immense which made them seem attractive. Now it’s full of people who are very outwardly attractive but have less talent. Is that a trade I think we should make as a society?  Hell no.

Looks absolutely matter in everything. I didn’t start at PokerNews in front of the camera – I started in production, but even in production I dressed up every day and did my hair and make up. As a result, people started to see me as someone who would fit on camera. If I had pink hair and shaved the side of my head when I started, I very much doubt I would be doing what I am doing now.

You have the ability to shape how people see you. I love to see women who complain about being over sexualized and then they post some “modeling” photos of her that are clearly sexualized. Most woman are overly sexualized in all industry. I think in general people choose to be seen like that and use it to their advantage, and yes, I absolutely do that. However, I also like to push boundaries. I am more worried about being pigeon holed as a person rather than being pigeon holed as hot.