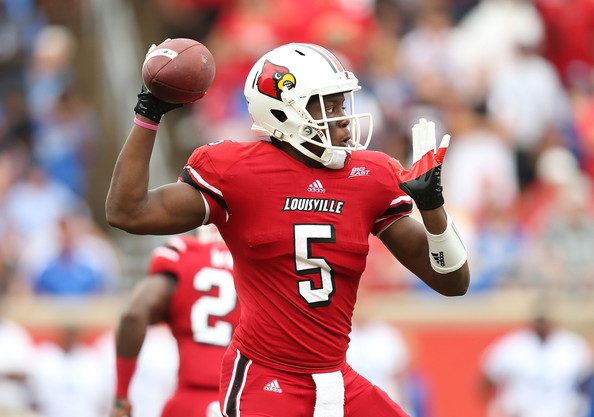 It took only one game for Louisville quarterback Teddy Bridgewater to vault up to the top of the Heisman odds after putting forth a show-stopping performance against Ohio in the opening week of college football.

Putting any weight this early, though, is still pretty premature as Geno Smith will tell you. But hey, Bridgewater was a hot name over the weekend, hot enough at least to see his name as the new favorite to win the Heisman Trophy this year.

At 5/1 odds, Bridgewater became the front runner for college football’s most prestigious individual award after standing at 9/1 heading into the season. The new odds put him above preseason favorite Braxton Miller, the Ohio State quarterback who now sits at 13/2.

Reigning Heisman Trophy winner Johnny Manziel, fresh off of his “benching” against Rice still has some pretty enticing odds at 15/2, just ahead of another pair of quarterbacks – Oregon’s Marcus Mariota and Clemson’s Tajh Boyd – who have 8/1 odds to their names.

Quarterbacks usually dominate this award with a handful of exceptions on running backs. In fact, since 2000, 11 of the last 13 Heisman winners have been quarterbacks (Reggie Bush and Mark Ingram, both running backs, won the award during the 2005 and 2009 seasons, respectively) proving that if you’re putting any money on anybody to win a Heisman Trophy, you’re better off jumping on any one of the available Qb’s on the board.

How much credence you put on Bridgewater’s performance over the weekend is entirely up to you. But with a schedule that includes no ranked teams, there’s a good chance that Bridgewater has one of those all-time great regular seasons that will ultimately ring hollow because of the paperweight competition his team has to face for the entire year. It could be a curse, or it could be a blessing.

But one thing we can all look back on: Geno Smith was the clear front-runner to win the Heisman last year after a month into the season. Then he went into the tank, proving that no matter how hot you start, your entire body of work throughout the year will still determine whether you end up becoming a finalist to the award, much less win it.