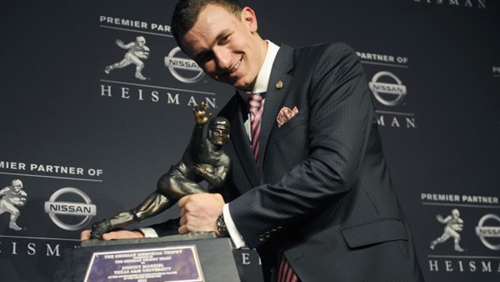 After all the brouhaha surrounding AutographGate, the NCAA faced  a tough decision: suspend Johnny Manziel for the entire college football season or mete out a lighter suspension of how many number of games.

In the end, the NCAA did what it always seems to do on these occasions: shit on itself and make it look like the complete joke that it is.

That’s the suspension you hammer down on Manziel? One half?

Excuse me, that’s not a suspension. That’s a benching.

Sure, he’ll miss the first half of the season opening game against the Rice Owls (the who?!) but once the second half starts, he can start sauntering off into the field like nothing ever happened. The records will show that he still played in the game, although how much of a game it’ll end up being is still to be determined (Rice is a +27.5-point underdog, in case you didn’t know).

But the utter hilarity and ridiculousness of the “one-half suspension” doesn’t even begin to highlight the inexplicable double standards the NCAA wants to shield from the public yet comically flaunts every damn time.

In the statement announcing his suspension, it was made clear that the NCAA found no evidence of Manziel receiving any kind of payment for signing autographs.

But at the risk of letting him get away scot-free, the NCAA decided to slap the half-game suspension on Manziel because he violated NCAA bylaw 12.5.2.1.

Manziel, it appears, didn’t do such thing, thus he gets slapped on the wrist and told to stand in the corner for one half. But hey, you can play in the second half, Johnny! Even better, you’re the starter for the Aggies when Alabama comes to College Station on September 14!

Set aside the belief that the NCAA was legitimately concerned about ruining its marquee game this season, the rule it cited to “bench” Manziel puts the NCAA’s stupid double standards on athletes not being able to profit off of their likeness yet the league can freely do front and center with all the spotlights pointed at it.

Do you mean to say that the student-athlete can take steps to stop individuals from profiting off of their name yet are impotent to do so when the pockets being lined with money are yours?

The student athletes can’t even make a penny off of their name and image for themselves but you, the NCAA can make millions upon millions selling jerseys, t-shirts, and other merchandise and paraphernalia with the student’s name on them?

Look, the rule is as outdated as it is absurd. And to think that it was “revised” as late as 2005 just goes to show how out of touch with reality the NCAA really is.

It couldn’t find the goods (proof that an exchange of money actually transpired) on AutographGate that implicated Manziel so it sought a secondary rule to show college football that not even the current Heisman Trophy winner is exempt from its long arm of the law.

Yet in doing so, it managed to highlight the exact reason why the NCAA is being labelled as the hypocrite that it is.

“You can’t let other people make money off of you, Johnny.”