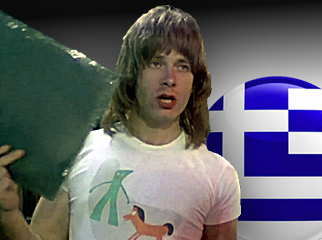 Greece has put all other European Union online gambling blacklists to shame with the publication of a mammoth list of over 400 domains that Greek gaming regulators have identified as operating without their say-so. The list briefly appeared on the Hellenic Gaming Commission’s website, only to be taken down about half an hour later, with no explanation provided as to the peek-a-boo look at Santa’s naughty list.

Capital.gr subsequently reported that the list (pictured being held by Greek gaming regulator Nigel Tufnoulopolous) was pulled because it had yet to be formally submitted to the nation’s internet service providers and financial institutions, which will be tasked respectively with blocking Greek punters from accessing the sites and blocking financial transactions with the sites’ associated companies. Failure to block the sites will result in the ISPs being fined €50k for every day the sites remain accessible. Blacklisted operators face fines of €20k per day for each type of gambling offered, €10k for advertising their wares, while direct marketing efforts will cost €200k per attempt.

The blacklist includes many of the usual Euro suspects, including 888, bwin.party, Sportingbet, Stan James, Unibet, plus Caribbean-based sports betting mainstays such as Pinnacle and The Greek, and some left-field choices, such as offshoots of Australian corporate bookie Tatts. Notably absent are Betfair, Bet365, Ladbrokes, William Hill and PokerStars, although Stars’ blog site made the grade for some reason. (Suggested make-nice blog post for Thursday: Liv Boeree’s souvlaki recipe?)

The exclusion of Betfair and Hills could be explained by the fact that the pair have filed applications to become the country’s monopoly online gambling provider, a move intended to expose the Greek government’s blatant favoritism toward former state-owned operator OPAP. This month, the European Commission lifted the ‘standstill’ period on Greece’s controversial decision to extend OPAP’s online monopoly over betting and RNG casino games through 2020, although the EC has reserved the right to launch infringement proceedings against Greece at a later date.

Clearly recognizing a thrown gauntlet when it lands at their feet, former blacklist title holders Bulgaria burnished its own naughty list on Wednesday with the addition of 10 more names, including Betvictor and a host of Betsson offshoots. That was on top of the 20 more names Bulgaria added last week, including Stan James, Boylesports and a raft of Asian operators (SBOBET, 188bet, Dafabet). Poor little Belgium, an early pioneer in tarring and feathering online gambling companies, added four more names to its own list midway through July, but that only brought its total up to a piffling 78 names. That’s just not going to cut it in today’s fiercely competitive world of gaming regulator one-upmanship. Your move, Lichtenstein…