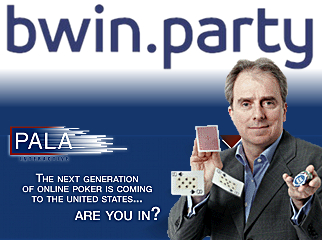 Online gambling operator Bwin.party digital entertainment has given investors fair warning that its Q1 revenue slump showed no signs of abating in Q2. The company released a trading update on Wednesday saying its revenue generation had been ‘softer than expected’ due to a string of unfavorable sporting results and ‘competitive pressures’ in its UK and Italian bingo operations during the three months ending June 30. Bwin.party will release its precise Q2 figures on August 30. Meanwhile, the news sent Bwin.party stock down as low as 117p before closing out Wednesday’s trading at 121.9p, off 6.5%.

Bwin.party CEO Norbert Teufelberger suggested things would improve in H2 thanks to the rollout of its new poker product in August, the debut of a social sports betting product currently in closed beta testing and the September launch of a mobile version of Bwin.party’s payment processing offshoot Kalixa Pro.

Teufelberger also insisted the company was “on-track” to submit its New Jersey online gambling license application by the July 29 deadline. Bwin.party has teamed with MGM Resorts and Boyd Gaming, co-owners of Atlantic City’s market-leading Borgata gaming hall, to participate in New Jersey’s regulated online market, which is set to go live this November. Teufelberger also touted the $15m check the company cut the state of Kentucky last month to atone for its past US sins, saying the ransom had effectively resolved the last of Bwin.party’s legal liabilities stemming from its pre-UIGEA activities in the US market.

EX-BWIN.PARTY CEO JIM RYAN’S PALA INTERACTIVE JV RAISES EYEBROWS
Bwin.party shed some more legal baggage last December when former co-CEO Jim Ryan (pictured above) agreed to walk the plank rather than complicate Bwin.party’s pursuit of various US gaming licenses. While Ryan said at the time that he was looking forward to spending more time with his family in Canada, he has since resurfaced at the head of Pala Interactive, an online gambling joint venture with California’s Pala Band of Mission Indians. For the moment, the business is entirely speculative, as the Golden State struggles to reach consensus between legislators and stakeholders in order to make online gambling a legal reality.

PokerFuse reported that Pala interactive intended to offer both online poker and casino games in California, which is odd, since none of the state’s recent draft bills envisioned anything other than a poker-only system. Odder still is the fact that Ryan has found common cause with the Pala band, whose chairman Robert Smith has been very vocal about prohibiting so-called ‘bad actors’ from ever participating in a regulated online gambling system. In May, Smith signed his name in support of a draft bill that would bar any company, individual or software that accepted US customers not just post-UIGEA, but at any time, from California’s regulated online market.

Can Smith really be unaware that Ryan was once head of Excapsa, the parent company of Ultimate Bet, a poker outfit that continued to accept US customers right up until the US Department of Justice pulled the rug out on Black Friday? While Ryan had by then moved on to head up PartyGaming, public documents confirm that he was still calling the shots at Excapsa months after the UIGEA was signed into law in October 2006. What’s more, Ryan presided over Excapsa during UB’s infamous cheating scandal and the ensuing coverup, and Pala Interactive apparently intends to use the same Realtime Edge software that allowed Russ Hamilton and others to cheat other players out of millions of dollars (although the software’s ‘god mode’ has since been patched to prevent a recurrence).

IVEY PALS UP WITH PALA
Pala Interactive has also announced a deal with poker player extraordinaire Phil Ivey, who will serve as Pala’s brand ambassador. Ivey brings his own unique baggage to the endeavor, having been a high profile member of Full Tilt Poker’s pro roster prior to the company’s spectacular post-Black Friday flameout. While Ivey has never been charged with any criminal offence stemming from FTP’s activities, questions continue to swirl over his alleged use of FTP’s accounts as a credit piggy bank with extremely lax repayment standards. Given that FTP’s former US customers – many California residents presumably among them – are still waiting to be reunited with their long-frozen deposits, Ivey’s presence in Pala Interactive promotional material may not be the marketing coup Pala apparently anticipates.

There’s also the unresolved matter of Ivey’s dispute with London casino Crockfords over its refusal to pay £7.8m in baccarat winnings Ivey claims to be owed. The casino has stated that Ivey’s payday was the result of a scam the poker star perpetrated with the help of a female accomplice, who has been banned from other casinos over similar alleged scams. Again, nothing has been proven regarding Ivey’s participating in or having knowledge of any wrongdoing, but should evidence of such complicity ever surface, an association with Ivey would be toxic for the owner/operator of a California brick-and-mortar casino.