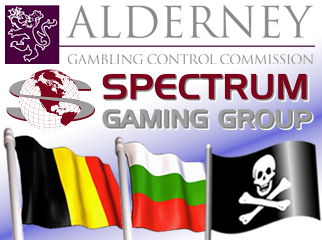 That’s 54 more names than on the first blacklist drawn up by the Bulgarian State Gambling Commission. Among the 20 names thus tarred and feathered are the familiar faces of 888, Bet365, Betfair, Befred, Ladbrokes, Sportingbet and Unibet. Bulgaria first announced plans to IP-block unlicensed gambling sites last year, with the digital firewall scheduled to go up this March. The move was supposed to precede the introduction of a regulated online gambling regime, but while the necessary legislation has been published, it has yet to be officially enacted.

In less punitive regulatory news, the Isle of Man Gambling Supervision Commission has inked an info-sharing agreement with the Estonian Tax and Customs Board, which regulates gambling and lottery activity in the Baltic country. The goal of the agreement is to improve regulatory standards in both online and land-based gaming sectors to better protect consumers and to create efficiencies for businesses.

Not to be outdone, the Alderney Gambling Control Commission (AGCC) has teamed up with Spectrum Gaming Group to help regulatory agencies craft online gambling regulations. Andre Wilsenach, exec director of the AGCC, says the new Alderney Spectrum eGaming Advisors (ASeGA) will provide “an opportunity to progress common best practice standards of operation.” Spectrum Gaming managing director Michael Pollock called the joint venture a “perfect fit between an experienced, respected regulatory agency and a private firm that already serves tribal, state and national governments around the world.” ASeGA will also provide due-diligence and background investigations to determine a licensee’s suitability to operate in a given jurisdiction.