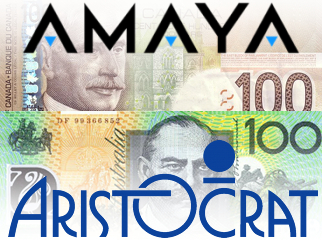 Canadian gambling operator Amaya Gaming Group lost $7.4m in Q1 2013, despite a nearly five-fold increase in revenues since the same period a year earlier. If you’ve been under a rock, Amaya has been on something of an acquisition binge over the last little while, having added software developers CryptoLogic, online poker network Ongame and gaming device supplier Cadillac Jack in 2012 alone. But costs associated with these acquisitions led to Amaya posting a net loss of $7.1m in 2012 and the ship has yet to right itself.

For the quarter, Amaya’s revenues hit $38.1m, up 496% from the previous year, while adjusted earnings (excluding $2.66m in one-time costs) went from a loss of $532k to $10.26m. But selling and marketing expenses more than doubled to $3.73m, while general and administrative expenses rose 358% to $34.37m due to increased amortization costs, consulting and professional fees and the termination of surplus staff following the acquisitions. The acquisitions were also primarily responsible for financial expenses rising from $0.41m in Q1 2012 to $6.21m this year.

Amaya CEO David Baazov maintains that the hangover from the acquisition binge will eventually fade and the new additions will prove their worth to the company’s bottom line. In fact, Cadillac Jack announced on Wednesday that it had reached a multi-year deal with “one of its largest customers in Mexico” to expand its leased install base by 890 gaming units across 13 locations. Amaya’s 2012 revenue came to $76.4m but the company is projecting full-year 2013 revenue in the range of $156m to $167m, with adjusted earnings between $55m and $64m.

For the six months ending March 31, Aristocrat Leisure reported a 7.5% fall in revenue to A$380.5m (US $366.6m), for which it blames a reduced games release schedule in Japan and other ‘rest of world’ markets. However, profit rose 11.2% to $52.5m and the company projects the trend will extend into the second half of its fiscal year. Lower operating costs allowed the company to shave $55.6m off its net debt and, even better for investors, Aristocrat announced it would pay a dividend of seven cents per share, up from two cents in H1 2012.