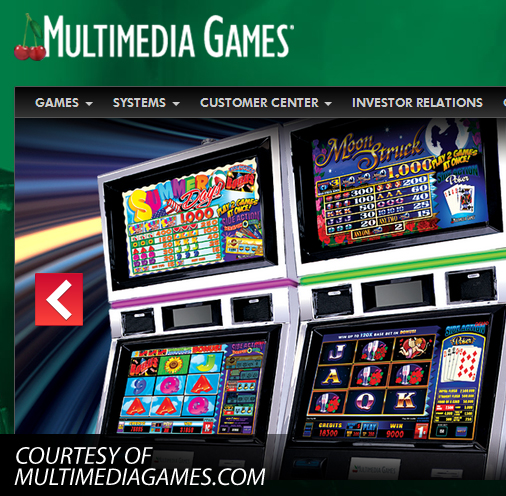 If you had to guess the best-performing gambling stock of the last two years, you’d likely narrow it down by assuming the company had some sort of exposure to Macau, the world’s largest gambling market and one that is still seeing impressive growth, particularly relative to more mature and stagnant regions such as the US and Europe. If you were told the company did no business in Macau, you might think guess it had a presence elsewhere in Asia – perhaps Singapore. Told the company had no Asian presence of any kind, you would likely then assume that the company was somehow involved in iGaming, and saw a nice boost from growth in Europe or optimism about the recent legalization of online gambling in several US states.

But you’d still be wrong. Over the last two years, shares of Multimedia Games (MGAM) have risen 361 percent, going from $5.33 on May 3, 2011 to $24.57 on May 3, 2013, and out-performing every other gambling stock in the world. (The second-best performer is not in Asia either, but is an online gambling operator: 888 Holdings (888.L), which has also more than quadrupled over the past twenty-four months thanks to impressive growth in Europe.) And yet, Multimedia Games’ business model is distinctly old-fashioned – and certainly not one that would, on its own, generate tremendous enthusiasm from investors. It manufactures slot machines for American casinos, with a focus on developing Class II (or bingo-based) games for tribal casinos. Its customer base is not seeing tremendous expansion; the growth of Indian casinos in the United States has slowed dramatically in the last few years, and the industry faces many of the same challenges facing non-tribal regional casinos in the U.S. The economic recovery has been slower than expected, leaving overall gambling revenue in the US largely flat; for the tribes, the story is similar. According to data from the National Indian Gaming Commission,Indian gaming revenue was $27.2 billion in 2011, versus $26.7 billion in 2008, representing annual growth of less than one percent a year. While tribal casinos have been somewhat immunized from the cannibalization facing many regional operators, tribal projects in New York, Connecticut, Minnesota, and California, among other locations, are facing revenue pressure from the expansion of regulated gambling in their own and/or neighboring states. Multimedia Games’ competitors – notably International Game Technology (IGT) and WMS Interactive (WMS) – have yet to fully recover from the 2008-09 recession, as evidenced by the fact that IGT stock still trades well below its levels from the last decade, while WMS was bought out by Scientific Games (SGMS) at roughly half its all-time high.

Given those challenges, MGAM’s sharp rise is certainly surprising; of course, given its May 2011 share price, it’s obvious that few, if any, people predicted the company’s success over the past two years. Indeed, Multimedia Games stock looked like a bit of a dog. Shares had more than tripled from the March 2009 bottom for the broad market; but in the economically sensitive gambling industry, that was far from unusual, and the stock was still at a fraction of its all-time high near $30 a few years earlier. Most gambling stocks were crushed in 2008-09 only to rebound sharply as the market finally began to recover. Most of MGAM’s gains came in the second quarter of 2009; from August 2009 to May 2011, the stock barely moved as the broad market gained nearly 40 percent. The company had earned nineteen cents per share over the previous twelve months, but that was only due to a large income tax benefit of fifty cents per share. Its recent history had been similarly unimpressive; a massive loss in recession-marred 2009 followed three years in which the company, in total, earned a little than three million dollars. Over the five years, total revenue had fallen twenty percent, and the company’s business in Alabama had just collapsed after state officials began raiding electronic bingo operators and Multimedia Games’ customers closed up shop. It hardly seemed a company poised for growth, particularly as a minor player in a competitive industry.

But there were some signs that investors could have seen, even if they couldn’t have predicted a nearly five-fold gain in the stock price. Free cash flow – an often unappreciated number – had remained strong for the company even through the dark days of 2008 and 2009; though it was posting a net loss on an accounting basis, cash was still coming through the door. More notably, the company had a new CEO: Pat Ramsey, promoted from within after former CEO Anthony Sanfilippo was hired away by Pinnacle Entertainment (PNK) in March 2010. In the wake of Sanfilippo’s departure, the company’s board initiated a “strategic review” of the company’s alternatives, which it noted at the time, included possibly selling the company.

After a six-month process, the board decided to keep itself independent, removed the word “interim” from Ramsey’s title and instead decided on a number of initiatives to boost the business. These included paying down the company’s debt, which would be halved between September 2009 and September 2011; applying for licenses in different states to diversify away from its reliance on Oklahoma and Mexico; and focusing on sales of equipment rather than leasing and revenue-sharing agreements. None of the ideas were particularly ground-breaking – on a post-earnings conference call in November 2010, a disgruntled investor called the process “a non-event” – but they were smart, solid, and fundamentally sound. The company paid $3.7 million more in interest on its debt than it received on its cash in fiscal 2008; by fiscal 2012, the company’s interest income modestly exceeded its interest expense. That shift alone boosted earnings by thirteen cents a share. The move into new jurisdictions has been a smashing success; in September 2010, according to a filing with the Securities and Exchange Commission, the company had barely 1,000 units in the US outside of its substantial presence in Oklahoma and its soon-to-be-doomed operations in Alabama. By March 2013, according to another filing, that number had more than tripled to nearly 3,300 in 17 states. In February, the company was finally licensed in Nevada; it has made tremendous progress in major markets such as Washington, Florida and California as well. And equipment sales increased 55 percent in the first quarter, boosting revenues.

The cumulative effect of these seemingly minor initiatives has been major. By lowering interest expense and increasing revenue, the company is making more money. Notably, it is making more money than Wall Street expects; it continues to blow away earnings estimates with its quarterly reports. On April 30th, the stock rose 22 percent after reporting its second quarter earnings and raising its projection for full-year profits. That’s not the first time, either; it rose 17% after reporting in January, and saw 17% and 35% single-day gains after earnings releases in 2012. It’s not as if Multimedia Games’ growth is all that staggering, either; in the most recent quarter, revenue grew 18 percent and pre-tax profits 32 percent. That’s certainly helpful – and better than nearly any gambling company, supplier or operator, in the US market – but relative to other growth stocks it’s hardly unheard of.

The irony is that Multimedia Games has created what every gambling company in America is dying for: any kind of growth. And while those companies swing wildly at social gaming or iGaming initiatives, Multimedia Games has created enviable growth in its revenue, earnings, and stock price simply by executing its old-fashioned business plan better than its competitors. The company’s growth has largely come from Class III customers – largely captive to IGT, Bally, WMS, and a few others in the past – and new, innovative products such as the TournEvent system for slot tournaments and so-called “High Rise” slot machines with massively tall LCD displays above the reels. Innovation, execution, balance sheet flexibility, and excellent management. That’s what Multimedia Games has used to out-perform every other gambling stock out there.

Interestingly, the Multimedia Games strategy is essentially what the activist group in the IGT proxy fight was clamoring for: a return to a focus on the company’s legacy slot machine business, rather than expensive forays into online gambling and social gaming, segments that are outside the company’s core competency. To be fair to IGT, the comparison is not entirely fair; Multimedia Games’ far smaller size and far narrower footprint allowed minor success in new markets to impact its overall numbers. For a company the size of IGT to change has often been likened to turning around an aircraft carrier; it must be down slowly, and carefully.

But the strategy employed by Multimedia Games does show that sometimes the sexy, flashy corporate ideas can be trumped by old-fashioned focus, responsible capital management, and the development of good products. While larger companies, in particular, may not be able to mimic Multimedia Games’ strategy, they should pay attention to its process. The company was willing to admit that it was not operating at a level it wanted to; it actively searched for ways to improve its operations and its balance sheet. Too many companies – suffering from bureaucracy or inertia – fail at that simple task of looking in the mirror. Multimedia Games did so, and as a result, the company and its shareholders have profited – more than anyone else in the gambling industry over the last two years.