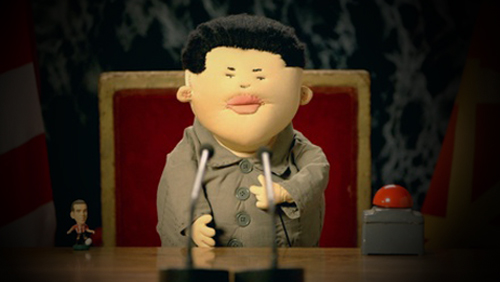 The Irish Bookmaker, Paddy Power, do it again, as they create yet another hilarious TV ad that pushes the boundaries of taste as far as they can be pushed.

If Christian Woolfenden and his genius marketing team at Paddy Power were ever at the wrong end of a cost cutting axe, they could walk into the writing rooms of the world’s funniest TV shows and settle down to work in a heartbeat.

Once again the former Global Brand Director for Bacardi, and his team, have pushed the boundaries of bad taste to absolute breaking point with the release of a hilarious YouTube advert called ‘Chairman Kim’.

The advert, which is sure to go viral, features a puppet version of the trigger happy North Korean dictator Kim Jong Un as he joins forces with Paolo Di Canio to save Sunderland football club from relegation from the Premier League.

The 1 minute 42 second video follows in the footsteps of the laugh-a-minute adverts that have been released at Cheltenham Festival, in recent years, such as the ‘Chav Tranquiliser’ and ‘Ladies Day’ video clips, that were both banned by the Advertising Standards Agency (ASA). But unlike their competitors Betfair, who have just, had yet another of their TV ads banned by the Generals at the ASA, you get the impression that Paddy Power couldn’t give a rats. In fact, they are probably expecting the ad to be banned, and yet punters will still send it spinning around the social media circles, giving the boys wearing green y-fronts all of the exposure they need.

Paolo Di Canio was appointed as the new Sunderland manager, in March, after the premature sacking of one of the countries most respected managers Martin O’Neill. The appointment hit the national headlines after the ex-foreign secretary, David Milliband, resigned from the board of the club no sooner had the appointment been made, citing Di Canio’s “past political statements’ as his reasoning.

Di Canio has gone on record to describe himself as a ‘fascist, not a racist,’ after he was fined £7,000 and received a one match ban in 2005, for making a one-armed salute to a group of supports when playing for the Roman club Lazio. Di Canio was once quoted as saying Mussolini was ‘a very principled ethical individual’ who was ‘deeply misunderstood.’

The video focuses on Kim Jong Un has he breaks down his tactics for Sunderland’s Premiership survival in a five point plan.

‘Our viewpoint is identical on everything,’ the puppet says in reaction to his relationship with Di Canio.

1. Blow up Southampton. There will be no team with the words ‘South’ in my league.

3. All Sunderland players must celebrate their goals like this {then shows the Di Canio one armed salute} Alan Shearer style.

4. All Sunderland fans get a free meat pie at their next home match (shows a fake meat pie with a dog inside it).

5. Maggie Thatcher tribute. Every single Premiership ground should uphold one minute sincere crying before kick off {video cuts to a hoard of Koreans wailing in the street}.

Paddy Power are currently offering odds of 1.11 for Sunderland to avoid relegation with Stoke, Aston Villa, Wigan Athletic, QPR and Reading all looking more likely to sink first, and 26.0 for North Korea to declare war on the entire world during 2013.