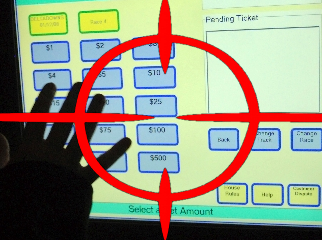 As the NCAA March Madness tournament ramps up action at Nevada casino sportsbooks, the Nevada Resort Association – the other NRA – has ramped up its opposition to the electronic sports betting kiosks in operation at small pubs and clubs across the state. The state Senate Judiciary Committee heard testimony on Wednesday from NRA lobbyist Pete Ernaut, who wants legislators to approve Senate Bill 416, which would ban sports betting kiosks from establishments holding restricted gambling licenses.

Restricted gambling licenses limit operators to 15 gaming machines per location, but none of the machines can offer blackjack, craps, roulette or baccarat (so basically, slots, video poker or Pacman). Existing Nevada gaming regulations don’t view kiosks as proper sportsbooks because they don’t accept or dispense cash, but merely act as a communications device between punters and their pre-registered accounts at betting outfits like Leroy’s Sportsbook, which is now under the William Hill US umbrella. Hills operates 82 such kiosks in Nevada, and CEO Joe Asher has called SB 416 an “anti-competitive” bill. Cantor Gaming, which operates many of the sportsbooks in Las Vegas Strip casinos, is also a major kiosk operator.

The kiosks have been on the NRA’s radar since 2011, but the furor seems a tad overblown, given that kiosks accounted for a whopping $600k of Nevada’s $170m sports betting revenue in 2012, or one-third of one percent of the total. Asher says there is “no evidence” kiosks have had any negative impact whatsoever on the big casinos’ sportsbook business, and notes that the sportsbooks themselves offer their customers the option of wagering remotely by telephone and computer.

But who needs logic when you’ve got emotion? The Associated Press’ Sandra Chereb reported that Ernaut believes a line in the Nevada sand needs to be drawn. “If we say sportsbook kiosks isn’t [sic] a problem today … then is virtual blackjack okay? What happens when they’re in Starbucks?” (Last month, Ernaut suggested the machines would soon pop up in car washes and grocery stores.) Ernaut claims the kiosk approval was a pilot program that’s due to expire June 30 and shouldn’t be renewed.

A plea for the continued existence of the kiosks was made by the Nevada Restricted Gaming Association’s Sean Higgins, who reminded Committee members that “no one said a word until [the kiosks] started getting out there more. If you’re too successful, people are going to try to push you back down.” Golden Gaming CEO Blake Sartini, whose 40 PT’s Pub and Sierra Gold venues in Nevada feature Hills’ kiosks, noted that these machines were properly vetted by regulators in September 2011 and accused the NRA of baseless fear mongering. “There is no fire. This is a false alarm.”

The Committee did not take any action on Wednesday. Last month, committee chairman Tick Segerblom – who recently introduced legislation to allow betting on federal elections – said he didn’t believe kiosks were “cannibalizing” casino sportsbook handle but also claimed he’d yet to make up his mind on the matter.