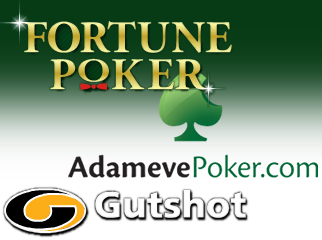 Fortune Poker, the Malta-licensed site on Boss Media’s International Poker Network (IPN), has announced it will cease operations effective April 1. Sadly, this doesn’t appear to be an early April Fool’s prank. A notice posted to FortunePoker.com states that due to “many changes in the online gaming industry, it has been a struggle to continue to support our players and affiliates to the fullest.” As such, Fortune “has made the unfavorable decision to close its gaming/poker operations.”

Gameplay at Fortune will cease March 31 at 23:59 GMT and the cashier will be open until April 2 at 23:59 GMT to handle cashouts. Rakeback, VIP Prizes and Race Prizes will be paid into accounts “promptly on the 1st of April.” The site will cease all communications effective April 15.

ADAMEVEPOKER TIRED OF REVOLUTION RUNAROUND
In yet another ‘not a prank’ announcement, AdamevePoker will also close its doors on April 1, although this announcement differs from Fortune’s in that AdamevePoker (a) hopes that its demise will be short-lived and (b) offers specifics as to the reason behind its decision. The Revolution Gaming Network skin issued a notice to players saying it was shutting its poker room but keeping its casino and mobile betting products active as “in light of recent events and the difficulties faced by our poker room, we have to suspend deposits for the safety of funds of our players.”

A followup email cited the smoking gun as “many months settlements transfer delay from the network,” a problem that has plagued Revolution for months and was widely considered to be the catalyst for Revolution segregating its fishier players from other Revolution skins’ sharks. AdamevePoker insists that its casino customers “will continue to be able to withdraw their funds as normal” and that “all poker related withdrawals will be processed as soon as [Revolution] covers all due settlements.”

GUTSHOT POKER UNDER NEW MANAGEMENT
If you ever doubted that like attracts like, consider that troubled poker room Gutshot Poker has found a new home on the Revolution network, as well as on two other networks; Ongame and Play2B. Gusthot was recently acquired by the Betsnetwork Group and will carry on in conjunction with Malta-based Goalgaming Ltd., whose owners include Francesco Merighi, the CEO of the three-month-old Play2B network, which inked a poker deal with Austrian gambling site PlanetWin365 last month.

Players who thought their deposits had vanished when Gutshot left the Merge Gaming Network were only partly right: in an email to players, Gutshot’s new management essentially says that deposits have been converted to roll-over bonuses, requiring players to (for example) rake €100 in order to be able to withdraw €50. If for any reason you’re unable to play for one month, Gutshot will reduce your balance by 10% each month. Any players who fail to log into their account by April 7 will forever surrender the right to enjoy these generous terms. Gutshot acknowledged that this “isn’t the perfect solution you might have hoped for,” but hey, it’s an imperfect world, right? Right?