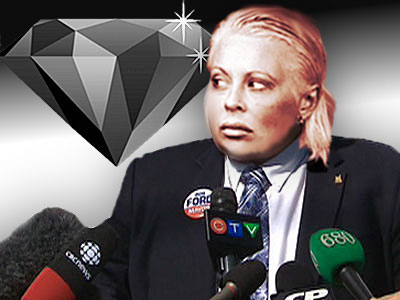 Has anyone ever seen Lock Poker CEO Jennifer Larson and Toronto mayor Rob Ford in the same room at the same time? One can’t help but notice the parallel paths being walked by the above pair as they attempt to mitigate the fallout of their scandalous behavior. On Tuesday, Ford admitted having smoked crack cocaine since being elected mayor, while Larson must be smoking something equally potent to believe Lock can carry on much longer without at least attempting to process its hefty backlog of players’ withdrawal requests.

Rob’s brother, Toronto city councillor Doug Ford, has ridden to his sibling’s rescue with a classic ‘the best defense is a good offense’ gambit. Doug publicly attacked Toronto’s top cop, Chief Bill Blair, after Blair voiced his disappointment from viewing the now infamous video of the mayor making homophobic comments while sucking on a glass pipe in an alleged crack house. Doug accused Blair of displaying “bias” against the mayor and setting himself up as “judge, jury and executioner” of Toronto’s cracktastic public face. Doug demanded an immediate investigation into heretofore unmentioned alleged conflicts of interest between Blair and police services board member Andrew Pringle.

Similarly, Larson and her Lock cohorts have attempted to redirect their unpaid players’ anger by accusing the Revolution Gaming Network of attempting to steal Lock’s players following last week’s severing of ties between the companies. At the heart of the matter is a clumsy attempt by Pure Poker, a previously dormant Revolution skin, to sign up Lock’s players before they could re-up with the new standalone Lock 2.0 site. Lock claimed Pure Poker had made ‘misleading promises” about redeeming players’ long-frozen Lock account balances, which outraged Lock, because making promises with little basis in truth infringes on Lock’s unique selling point.

In Lock’s case, the role of Doug Ford is played by legal counsel Bryce Vincent Geoffrey, who helped craft very loud and very public statements about Lock initiating legal action against Pure Poker and Revolution. Lock’s brain trust also rejected Revolution’s statement that it gave Lock the boot “due to lack of payment to the Network and a large growing debt.” Revolution maintained that it “tried very hard to help Lock work through its problems with slow withdrawals to players” but ultimately was left with no choice but to “segregate Lock players almost entirely from Network cash games.” Revolution has vowed to “pursue Lock to the full extent possible by law to recover all monies owed and damages caused.”

We’d suggest Revolution act without delay, as Lock 2.0’s traffic has reportedly plummeted to below that of Bitcoin-only poker site Seals With Clubs, leaving open the question of just how long Lock can survive in its present form. A person with knowledge of the situation claims that at its peak – shortly after joining Revolution in May 2012 – Lock was generating $2m in monthly revenue. Considering its ‘quoth the Larson: nevermore’ approach to payouts, Lock may have enough cash on hand to limp along a while longer, although it’s unclear just how big a haircut Lock took when its primary payment processor was subjected to that surprise Cyprus bank levy this spring.

Torontonians who have long found Ford’s oafish antics galling are bemoaning the fact that there is no legal mechanism by which he can be removed from office over his recent admission. Similarly, long-suffering Lock players don’t have much legal recourse to compel Lock to do the right thing and will find precious little comfort in the company’s OJ Simpson-worthy pledge to work tirelessly to find the real killers of their bankrolls.

At least Toronto voters will have the opportunity in 2014 to vote for an actual adult to take Ford’s place at City Hall. Lock players can vote only with their feet and will likely have to leave their deposits behind. Word to the wise: if, in the months following Lock’s inevitable demise, a new Crack Pipe Poker site launches with great fanfare, keep a wide berth.