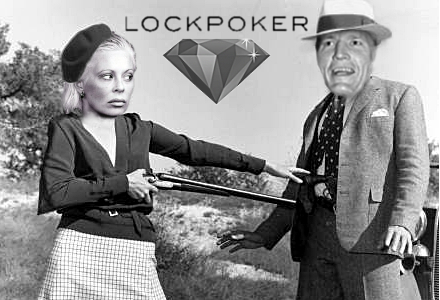 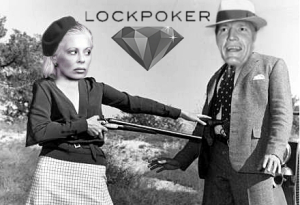 Bonnie and Clyde. Natural Born Killers’ Mickey and Mallory Knox. Just a few of the more notorious lawbreaking male/female duos cinema has celebrated over the years. So what will they call the movie about online gaming ne’er do wells Jennifer Larson and Bryce Vincent Geoffrey? Jennie and Clod? Natural Born Shysters? Beauty and the Least?

Few in the online gambling industry were surprised by the recent news that Bryce Vincent ‘Vinnie’ Geoffrey had been let go by Cake Poker. In his brief tenure as Cake’s legal counsel, Geoffrey’s personality (and/or his antisocial personality disorder — tomato, tomahto) had systematically alienated many of the company’s B2B clients, to the point where it was starting to negatively impact Cake’s bottom line. When PokerListings agreed to backstop Cake earlier this year, they did so on the condition that they be allowed to conduct a comprehensive review of the company’s assets and liabilities, and the latter of these categories was where Geoffrey was swiftly relegated.

PokerListings’ insistence on jettisoning Geoffrey was a godsend for Cake management, as it relieved them of the responsibility of having to fire Geoffrey themselves. The Cakesters were all too aware how Vinnie’s irrational sense of entitlement had come back to haunt the first supplier to the online gaming industry that had the misfortune to retain him. In that instance, upon being informed that his shoddy services were no longer required, Vinnie chose to help himself to a few office supplies on his way out the door, including a stapler, a box of yellow highlighter pens and, oh yeah, a near-million dollar condominium in Vancouver.

Pressed to turn over the condo keys, Geoffrey chose instead to attempt to extort his former employers thusly: if they didn’t let him permanently park his thimble on Boardwalk, he’d divulge all the trade secrets he believed he’d learned during his time on their payroll. Fortunately, the courts saw things differently and issued a default judgment against Geoffrey for the entire purchase cost of the condo in question, leaving the inept extortionist $800k in hock to his former employers. While he allegedly put the condo on the market in order to make good on what he owes as per the settlement agreement, he’s yet to actually follow through (a pattern painfully familiar to anyone who’s worked with him) by cutting his creditors a check. This has had him in default of his settlement for over two years and counting, with no end in sight.

A LOCKY BREAK FOR VINNIE
Which is where the female face of our dastardly duo enters the picture. Geoffrey’s former roommate/co-squatter in the pilfered condo was none other than Larson, current CEO of Merge Gaming Network skin Lock Poker. Back in the day, Geoffrey and Larson shared more than just a toilet brush; they were also co-owners of First Financial Ltd., an eCom outfit that collapsed under its own weight after only a few years in operation. Following this debacle, Geoffrey and Larson made their separate getaways, but destiny would not keep them apart for long.

As we said earlier, few in the industry were surprised to learn that Geoffrey had been fired again. He has now been fired from every position he has held in our industry. However, jaws hit the floor when news spread that someone had actually hired him. But it all made sense after people learned it was Larson who’d unLocked her door for Geoffrey. Who else would be so foolish as to hire someone with a history of extorting his previous employers and just general incompetence? Just as water finds its own level (and flies find turds), these two find themselves inexorably drawn to one another.

Perhaps Larson is willfully blind to Geoffrey’s past transgressions. (“Vinnie’s not a sociopath! He’s just misunderstood!”) Or perhaps she’s just not that bright. Consider the time she was singled out by Malta’s Lotteries and Gaming Authority (LGA) for displaying an LGA logo on Lock’s website before obtaining the LGA’s say-so, rather than the other way around. And it was Larson who conducted the audit of disgraced Lock Poker Pro Jose ‘Girah’ Macedo’s hand histories ­— an Inspector Clouseau-worthy ‘investigation’ that somehow failed to uncover the blatant chip-dump of $100k that conveniently allowed Lock’s shiny new wunderkind to win the Lock Poker Challenge. Anyone else thinking Larson may have been the inspiration for that controversial Barbie doll from a few years back, the one programmed to say things like ‘math is hard?’

So Larson and Geoffrey are once again under the same roof, this time in Larson’s own apartment, from which the Lock Poker ‘empire’ is managed. Lock will undoubtedly be the last step on Geoffrey’s sociopathic stumble down the online gaming industry gangplank. The question now for industry watchers is not how long it will be before Geoffrey flames out again, but whether he’ll also reduce Lock to ashes in the process. If/when that happens, Larson will only have herself to blame. One is known by the company one keeps, and bad company makes for bad companies. The rest of the industry would do well to give this pair a wide berth, if for no other reason than to minimize the risk of being hit by a stray round when these two rebels without a clue go out in a final blaze of glory.

In future coverage we will dig further into the bizarre background of Bryce Vincent Geoffrey (‘Vinnie’) in his one-man criminal defense law firm in Ontario, Canada prior to his bumbling into our industry. We will also look into other court cases he has had with former employers in more recent times.