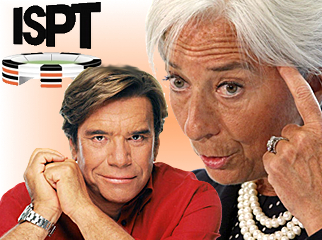 French police are investigating whether Christine Lagarde, managing director of the International Monetary Fund, is guilty of embezzling public funds to reward a former campaign contributor when Lagarde was finance minister under former President Nicolas Sarkozy. The donor in question is Bernard Tapie, French businessman/politician/singer/actor/match-fixer, whose Groupe Bernard Tapie (GBT) made an aborted (and somewhat inept) attempt to acquire the carcass of Full Tilt Poker after it succumbed to financial ruin following the events of Black Friday.

The investigation of Lagarde stems from her 2007 decision to refer to an arbitration panel a dispute between Tapie and state-owned bank Credit Lyonnais. The two parties were feuding over the bank’s sale (on Tapie’s behalf) of shoe-maker Adidas, a deal in which Tapie felt he’d been shortchanged. The arbitration panel ultimately ordered the bank (and, by extension, the French public) to pay Tapie €385m, including €45m in damages and €100m in interest. Suspicions were raised at the time that Lagarde’s decision not to appeal the panel’s generous ruling had been influenced by Tapie’s decision to switch his political allegiances and support Sarkozy in the 2007 presidential elections.

The news will hardly be welcomed by Laurent Tapie, Bernard’s son and co-head of the International Stadiums Poker Tour (ISPT). After one of the more comically inept product launches in poker history, the ISPT had finally started achieving something approaching credibility via the addition of Genting Casinos and Dusk Till Dawn as partners for the inaugural event at London’s Wembley Stadium. Will this latest brouhaha involving Tapie Sr. derail the ISPT’s still fragile momentum? Fortunately for the ISPT, the wheels of justice are notoriously slow, meaning even if Lagarde is found to have acted improperly, the French state won’t get around to suing Tapie to claw back his mega-payday until well after the ISPT tables have been cleared off the Wembley pitch.