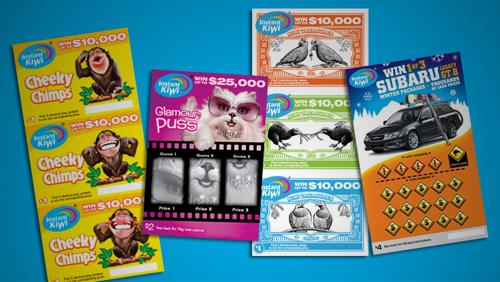 Instant Kiwi scratch card sales are becoming ever more popular, with more than $347 million dished out in prize money, during the past five years, according to a recent article in The New Zealand Herald.

With gambling legislation forcing companies to operate out of their country of origin, it’s great to see New Zealand (NZ) have found at least one way of keeping gambling generated revenue within the shores of its great country.

The NZ lottery has distributed the Instant Kiwi scratch cards since they replaced Golden Kiwi way back in 1989. Today, the tickets are tiered into four groups with five differing prize levels ranging from as low as $1 to as high as the $20 ticket that was released 2001/12. Jackpots range from $10,000 to $250,000 depending on the valuation of your ticket.

Despite being the only NZ lottery game to carry an age restriction for purchase (you have to be 18 or over) ticket sales have increased according to the figures released under the Official Information Act. The amounts that Kiwis have been winning increased from $59 million in 2007/08 to $90.7 millions in 2001/12; the number of winners have also increased in line with those amounts with $11.7 million people having a claim to settle when compared to $9.5 million back in 2007/08. The number of available games has decreased from 51 to 37, but the introduction of $15 and $20 tickets, into the tier system, has continued the increase in payouts and number of winners.

The report also revealed that there has been $22 million in unclaimed prizes during the past five years. This ‘lost’ money is contained within a prize reserve fund that is used to create special bonus prizes and improve upon existing prize pools.