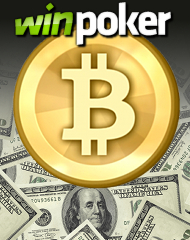 WinPoker.com, a Curacao-licensed skin on Playtech’s iPoker network, has become the first site on a major online poker network to add true Bitcoin functionality to its list of payment options. As first revealed by PokerFuse, Win Poker – not to be confused with fellow iPoker skin Winning Poker or the Winning Poker Network – now allows players to deposit directly via the site’s Bitcoin wallet and have the ‘crypto currency’ funds immediately converted to one of several fiat currencies (US dollars, English pounds, Euros or Indian rupees). Withdrawals can also be made directly to the player’s personal Bitcoin wallet without the onerous fees charged by credit card companies and traditional online wallets.

Up till now, Bitcoin’s online gambling presence has been limited to dedicated Bitcoin gambling sites like Satoshi Dice, bitZino and Seals With Clubs, or hybrid standalone sites like Switch Poker. Mainstream acceptance has come in the form of blogging platform WordPress agreeing in November to accept Bitcoins as payment, a move that was followed by online community Reddit. In December, the Bitcoin-Central exchange was accepted to operate within the European financial system, and Forbes recently reported that Seattle-based Coinlab has struck a partnership with Silicon Valley Bank to allow North American users of popular Bitcoin exchange Mt. Gox to convert dollars to Bitcoins without having to first transfer the funds overseas and incur the associated transaction fees.

The Bitcoin currency itself topped another milestone last week, hitting its highest ever value against the US dollar. Bitcoin surpassed the previous high of $31.90 set in June 2011 by notching $31,94 on Feb. 28. It then proceeded to bludgeon that record by hitting $40 on Tuesday, spiking to $49 on Wednesday before dropping back down to around $38. Consider that Bitcoins were trading at around $13 just two months ago, and it’s not hard to think ‘speculative bubble.’ After all, that June 2011 high was followed by a steep drop to just $1.99 a mere five months later. Is it coincidental that the Dow Jones index hit its own all-time high this week? Has ‘irrational exuberance’ infected every aspect of the financial markets? Or was the recent news that dedicated Bitcoin online gambling sites were actually doing good business sufficient to convince fence-sitters to get with the program?