Home / Business / Kazuo Okada steps down from Wynn board 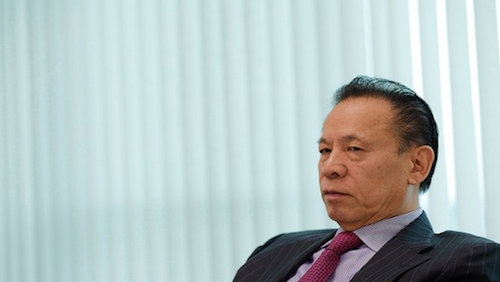 One of the casino industry’s longest running soap operas has taken yet another unprecedented turn after Kazuo Okada, co-founder and one-time largest shareholder in Wynn Resorts Ltd., resigned from the company’s board of directors. Okada’s resignation comes a day before shareholders were to have a meeting to vote on his status as a director of the company.

While nothing imminent was being reported regarding the shareholders meeting and its decision on whether to keep or boot out Okada from the board of directors, the Japanese tycoon pre-empted any such decision from being made, vacating his seat before any decision was to be made regarding his fate. It must be noted that had the voting taken place, a two-thirds vote from the shareholders would have been required to throw him out of the door.

Yet despite what appears to be a voluntary, albeit begrudging exit, Okada couldn’t resist throwing another pot shot at his one-time BFF, releasing a statement shortly after his resignation directed at Steve Wynn. “Since the year 2000, Steve Wynn has orchestrated a deliberate campaign to deceive me,” Okada said. “His actions have betrayed our friendship, the management agreement executed between us, the shareholders agreement executed in 2002, and ultimately Universal Entertainment Inc.”

Those might be fighting words for some people, but we’re surmising that Wynn couldn’t care less about Okada’s scornful remarks. For all we know, he’s probably throwing a party up in his presidential suite, celebrating the fact that his arch-nemesis has effectively removed himself from the gaming company’s board of directors after years of bitter feuding that included lawsuits being lobbed at one another at a balloon fight pace.

While resigned about his status on the company’s board, Okada still warned his rival that he’s still not done fighting and will continue to do so with regards to the forced seizure of his 20-percent stake in the company, a move the company took after an internal report alleged that Okada’s company, Universal Entertainment, was found to have violated U.S. anti-corruption laws through alleged bribery transactions it had made to regulators in the Philippines.

“Going forward, I will continue to focus my efforts on managing (Universal) and ensuring its continued growth,” Okada emphasized. “I remain determined to fight Steve Wynn’s involuntary redemption of my nearly 20 percent state in Wynn Resorts at a 30 percent discount.”

Wynn may have scored a huge victory with Okada’s resignation, but the latter isn’t going away meekly, cautioning everyone that this fight is far from finished.