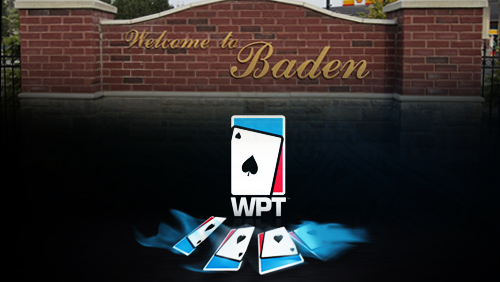 It’s been a long wait, but the World Poker Tour (WPT) has finally returned to European soil after a two-month hiatus. The last time the WPT dropped its impressive anchor into European soil, was during the Prague Poker Festival just before Santa was doing his rounds, and that event was won by the first ever Pole to join the WPT Champions Club, Marcin Wydrowski, who found a present of $413,666 underneath his tree.

This time the tour is in the spa town of Baden, just south of Vienna, a last minute switch from the originally advertised Montesino Casino, the host of the Season X event that saw the Dane Morten Christensen take home the title and $417,458 in prize money.

The piéce de résistance of Season XI WPT Baden is its €3,300 Main Event. It will be spread over two starting flights (1A & 1B) and players choosing to enter on Day 1A will be able to re-enter on Day 1B – should they fail miserably – in the almost standard re-entry format of today’s live multi-table tournaments. Each player will receive a starting stack of 30,000 and there is a late registration available until the end of Level Six on Day 1A. The five-day event will climax on Sun February 24th with the final table that will be streamed live on WPT.com. In addition to the Main Event the WPT are also hosting a special €10,000 High Roller event starting on Friday 22nd February.

With Christmas and the New Year over our shoulders the WPT is now powering full steam ahead. As the festivities in Baden end the WPT L.A. Poker Classic begins and that’s followed by pit stops at California, Venice, Barcelona and Florida; culminating in the WPT World Championship at the Bellagio, Las Vegas – an event that belonged to Marvin Rettenmaier during Season X.